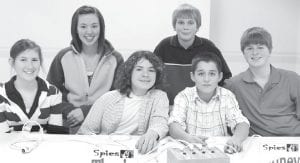 Quizzers are often surprised to see who wins the mystery category at local quiz meets.

For the second Bible Quiz meet, Sunday, Jan. 16, at Central Mennonite Church, the prize bags went to the teams averaging the fewest errors.

Miriam Wyse, one of “Spies” quizzers, is homeschooled. She attends First Baptist in Wauseon and is in her fourth year of quizzing for Central. What she likes about Bible Quiz is, “It’s fun. You meet new people. You get to study God’s Word.”

One of Zion’s teams, “Well Built and Handsome,” with only three members present, won all four of its matches and averaged 109 points. Members were Meg Short, Katie Yoder and Aaron Zimmerman.