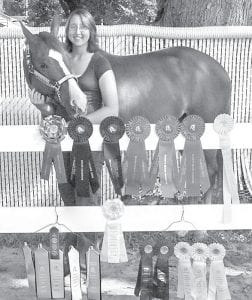 Melissa Felix, her horse “Peanut,” and the ribbons they won at the 2010 Henry County Fair.– courtesy photo

Melissa Felix, 17, Archbold, was named the grand champion in ground driving (light horses and ponies) in the horse category of junior fair competition at the Henry County Fair, Aug. 13-19, in Napoleon.

She also was reserve grand champion in senior showmanship, and took fourth place in trail in hand.

In the junior fair versatility show, Felix finished fifth overall. She placed sixth in reining and second in barrels.

A junior at Archbold High School, she is the daughter of Deb Felix, Archbold, and granddaughter of Dick and Jenny Miller, Archbold. She is a member of the Henry County Country Club 4-H club. Her 4-H advisors are Tia and Mark Waisner, Holgate.

Felix’s horse, Silky Story, also known as Peanut, is 10 years old. Felix has had the horse for almost seven years, and did all the training.

“Peanut was strictly a trail horse when we got her at age 3,” said Deb Felix. “We couldn’t even get her in a trailer when we bought her, but Melissa kept working with her.

“It used to take us 30 minutes or more to load her in a trailer. Now she goes in the trailer in under 30 seconds. Melissa has worked very hard with her horse and I am very proud of her.”