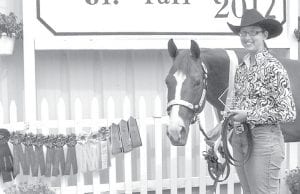 Melissa Felix and her horse “Silky Story,” with the ribbons they won at the 2012 Henry County Fair.–courtesy photo

A freshman at Northwest State Community College, she is the daughter of Deb Felix, Archbold, and granddaughter of Dick and Jenny Miller, Archbold.

She is a member of the Henry County Country Club 4-H club. Her 4-H advisors are Tia and Mark Waisner, Holgate. It is her final year in 4-H.

Silky Story, also known as Peanut, is 12 years old. Felix has had the horse for almost nine years.

She was the grand champion in ground driving and placed third in Senior English Showmanship in the Friday, Aug. 10, Draft and Driving Show.

She took first in barrels, tenth in horsemanship, and placed ninth overall in the versatility show, Wednesday, Aug. 15.