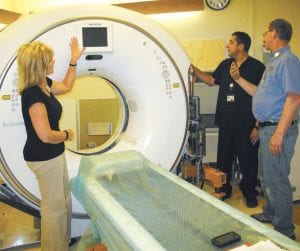 Barb Gibson, Fulton County Health Center radiology manager, left, and Chad Elling, a radiology technician, talk with one of the workers who were installing a new 128-slice CT scanner last week. The new machine will provide physicians a better view of their patients’ bones and internal organs. A better understanding of what’s going on inside a patient could lead to better surgical outcomes.– courtesy photo

Consumer Reports, the nationally-known independent product-testing organization, recently ranked the Fulton County Health Center at the top of its scale for surgery.

FCHC, a private, nonprofit hospital in Wauseon, was one of 11 ranked at the top of the scale out of 114 Ohio hospitals rated.

Based on 2009 data, the latest available, The Ohio Hospital Council said there are about 200 hospitals in the state.

Not all hospitals were rated in the recent rankings, because some may report data under the name of a parent company, or may not have sufficient data to report.

Patti Finn, chief executive officer of FCHC, said the ranking indicates “the fact that we are good at what we do.”

“We hope the people who see it appreciate the fact that there are good services here. They don’t need to leave the area” if they need a surgical procedure, she said.

For the ratings, data from 27 different types of surgeries were evaluated, including complication rates and age and condition of the patients involved.

“We’re always trying to make sure that we don’t have any infections.

“We have a very low infection rate,” she said.

Many factors weigh into reducing infection rates, including patient education. Finn said FCHC staff teach patients what they need to do before and after surgery to avoid infections.

For example, surgical instruments require special handling and preparation before going into the operating room.

The hospital environmental services team is responsible for keeping operating rooms clean. The dietary department makes sure patients get the right foods. The central registration de- partment makes sure the correct information gets to doctors and nurses.

It replaces a 64-slice machine, giving doctors a better image from which to work.

One of the first in the nation– and the first in northwest Ohio– the $760,000 machine was being installed last week.

“It’s amazing what this CT scanner can do,” McCoy said.

A fluoroscope allows realtime moving images of organs and bones inside the body.

“The thing with radiology is, image quality is almost doubling every one to two years,” McCoy said.

“To stay ahead of the curve, you have to keep updating equipment. That stretches a lot of community hospital budgets.”

Consumer Reports uses a graphic system to express its rating, from better to worse.

A red circle with a white dot is at the top of the “better” side.

A half-red, half-white circle is one step below.

A white circle is at the center of the scale.

A half-black, half-white circle is the first step to on the “worse” side.

An all-black circle is at the bottom of the scale.

In addition to FCHC, the 10 other hospitals receiving the red circle with white dot were located in Columbus, Cincinnati, Lima, Newark, New Albany, Youngstown, Parma, Ashland, Middleburg Heights, and Boardman.

Of those hospitals, only FCHC and the Institute for Orthopaedic Surgery in Lima are in northwest Ohio.

Eighteen hospitals were ranked one step below the top 11, and 70 were in the middle of the scale.

Eleven were ranked one notch to the “worse” side, while four received the allblack circle.

Finn said everyone at FCHC is excited about the news.

“The best thing about this is, it was unsolicited,” she said.

If employees at FCHC aren’t walking just a little taller, “they should be,” Finn said.