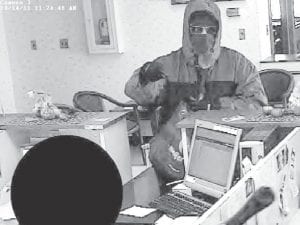 A security camera at the State Bank & Trust branch in Lyons captured the image of the man who robbed the Lyons bank, and another bank in Ridgeville Corners a year ago. The FBI released the photo.

Vicki Anderson, a special agent with the Federal Bureau of Investigation, said last week there are no new leads in the investigations of bank robberies in Lyons and Ridgeville Corners.

Just over a year ago, on Friday, Oct. 14, 2011, a man wearing a dark twotone jacket with a hood, dark sunglasses, a black ski mask, and black gloves held up the State Bank & Trust branch in Lyons at about 11 am.

About 44 minutes later he appeared in Ridgeville Corners, where he robbed the Sherwood State Bank. The total amount of money taken was never released.

He was carrying a darkcolored handgun, and was driving an older black small to mid-sized car with black-painted rims and shiny hubcaps. The car possibly had a rear fin, and orange lettering on the back.

Anderson, the media coordinator for the FBI’s Cleveland office, said the robberies are still under investigation.

Anyone with information about the robbery should call the FBI’s Toledo office at 419-254-8950.