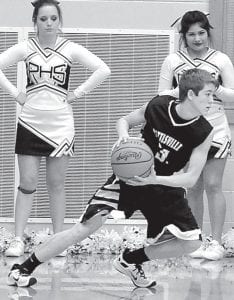 Detric Yoder makes a move to the basket in Pettisville’s BBC game at Fayette, Friday, Feb. 12.– photo by Mario Gomez

The Blackbirds entertained Wauseon, Saturday, Feb. 13, and dropped a 56-34 contest to the Indians.

With an opportunity to clinch an outright BBC title, Fayette took full advantage of its home court.

Ranked fourth in Division IV by the Associated Press, the Eagles jumped out to an early 8-2 lead before a Pettisville time-out stopped the run.

Dillon King scored four of Pettisville’s eight points in the first quarter, but it was a three-point basket at the end of the quarter that helped Fayette carry a 17-8 lead into the second.

Pettisville only managed a four-point second quarter, but Fayette played a patient style and scored nine points to take a 26-12 lead into the locker room.

Fayette never ran away with the game, but managed to keep Pettisville at bay the rest of the game. 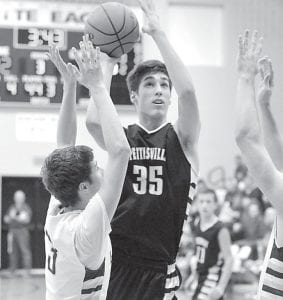 Caleb Rychener keeps his eye on the basket as he flies past a pair of Eagles.– photo by Mario Gomez

The Blackbirds outscored the Eagles 10-8 in the third to trail 34-22 going into the final eight minutes.

Fayette held the ball and found good shots as the clock wound down to a BBC title for the Eagles.

Neither team had a player in double figures. Gabe Beck led the Blackbirds with nine points while Fayette was led by Alec Bost with nine.

The Eagles grabbed 19 rebounds to 16 for PHS. The Birds committed 10 turnovers while Fayette had only five.

It was a different type of game when the Indians traveled west to take on the Blackbirds in the Bird Cage in a non-league contest.

Wauseon (18-3) asserted its dominance from the start, jumping out to a 17-6 lead after one.

The Indians kept their foot on the pedal, increasing their advantage on the strength of a 15-8 second quarter to go into the half up 32-14. 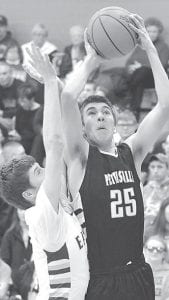 Wauseon put the game out of reach in the third, outscoring Pettisville 20-9 to stretch the gap to 52-23.

The Blackbirds outscored Wauseon 11-4 in the fourth for the 56-34 final.

Beck led all scorers with 15 points.

Carter Bzovi led the Indians with 14, while Luke Rychener had 10.