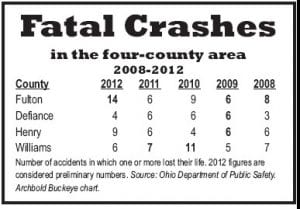 The number of fatal traffic accidents in Fulton County spiked in 2012, up more than 130% from the preceding year.

Even before 2012 was over, law enforcement and other groups were responding to the trend with special efforts.

The most recent development is the announcement of a new committee, funded through a state-administered, federally-funded grant, to promote safe driving within the county.

Preliminary figures released by the Ohio Department of Public Safety states there were 14 vehicle crashes in Fulton County that resulted in the death of one or more persons in 2012.

That’s more than double than in 2011, when there were six.

It’s also the highest number of fatal crashes that occurred in the last five years in Fulton County.

In 2012, Fulton County had the highest number of fatal crashes in the fourcounty area. There were nine in Henry County, six in Williams County, and four in Defiance County.

Fulton County has had a relatively high number of fatal accidents before. A quick check of this newspaper’s records showed there were 18 in 1999, and 12 the year before that.

One year, 1995, there were 22 crashes which claimed the life of at least one person.

A previous analysis of fatal crashes has led back to one reoccurring theme– failure to yield.

That includes drivers failing to stop at stop signs, or failing to yield to oncoming traffic after stopping at a stop sign.

William Bowers, a lieutenant in charge of the Toledo post of the Ohio State Highway Patrol, said troopers have looked into fatal crashes in Fulton County, and “failure to yield has come up again, along with seat belt use.”

Fulton County is covered by troopers from the Toledo post.

“People aren’t wearing their seat belts. Some fatals may have been prevented had they been worn,” he said.

“We saw the number of injury crashes increase, so we increased our patrols, including tactical squads, which is a saturation patrol.

“We brought the airplane up from Columbus, and had them fly around the county to look for violations.

“We concentrated on Central Avenue, US20, and US20A. They patrolled from the air and called to the ground when they observed a violation.”

A trooper in an OSHP patrol car would then locate the offender and issue the citation.

“The air patrol did spot violators, and troopers issued citations,” he said.

Was it an amazing success?

“I wouldn’t call it that. But we did get violators we normally wouldn’t have,” Bowers said.

“A lot of times, people will stop, look both ways, and, ‘where did that guy come from?’ It’s happens to all of us,” he said.

Years ago, when Fulton County fatal crashes were in the double digits, Miller said the sheriff department, then under former sheriff Darrell Merillat, got involved in the state “Click It or Ticket” and “Over the limit, Under arrest” campaigns targeting seat belt use and drunk driving.

“We made the deputies aware of it, and asked them when they had time, to work traffic,” Miller said.

“I think the campaigns made a difference.”

Another program is sponsored by the Ohio Department of Transportation.

It uses college students from the University of Findlay to watch particular stretches of roadway and intersections, and count the number of people using seat belts, by viewing whether or not the shoulder harnesses are in place.

When an area where seat belt use was low was identifi ed, Miller said enforcement there was stepped up.

But Miller said traffic enforcement is just one piece of the puzzle when it comes to fatal accidents.

“You can’t control Mother Nature,” he said, noting that one of the 2012 fatal crashes occurred in foggy conditions.

In the winter, Miller said he could declare a Level Three snow emergency (roads closed to all but emergency traffic), “but you know someone is going to try” to get out and drive.

He said today, more vehicles have things like front and side airbags, making them safer in crashes. As more of those vehicles are on the road, potential highway deaths are reduced.

Those factors, and others, are part of the picture of fatal auto accidents.

Miller said he and the other officials at FCSD pay attention to statistics, and try to react when they see a trend.

For example, recently FCSD has received grant funding to conduct highvisibility patrols, in which deputies on overtime go out during late-night an early morning hours, looking for those violating traffic laws, particularly DUIs.

The most recent such patrol concluded Tuesday morning, Feb. 5.

Torbet said the group will look into education and awareness programs that can be delivered to communities in the county.

Quarterly, Torbet said the group will examine fatal accident reports, looking closely at the causes of such crashes.

If there is something that can be done to mitigate a dangerous situation, the group will recommend action.

In the mid 1990s, when there were high numbers of traffic fatalities, Fulton County was in a “try anything” mode.

A small utility trailer was donated to the county and a woman who had lost a family member to a fatal crash painted a sign that was built on the trailer.

Based on what was then a popular advertising slogan, it featured a stop sign and read, “Just Do It- To Save Lives.”

It appeared at county intersections, where it would stay for a few days before being towed to the next one.

Miller said the trailer has been sitting in the sheriff department impound lot for years.

Plans are to get it out, make sure the tires and wheel bearings are still good, and park it around the county again.