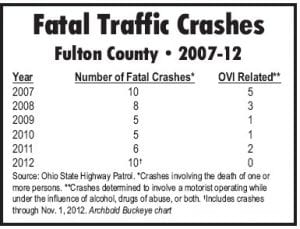 With two months left in 2012, the number of traffic crashes that have resulted in fatalities has almost doubled compared to last year.

There were six accidents that resulted in deaths in 2011.

The most recent occurred Tuesday, Oct. 30, when Tina M. Goodwin, 56, Wauseon, was killed after her car went out of control on an ice-covered bridge and collided with a pickup truck on US20A.

Statistics from the Ohio State Highway Patrol indicate that between Jan. 1 and Nov. 5, 931 people have died in traffi c crashes on Ohio roads.

“Unfortunately, we have no control over some of the conditions when accidents occur,” Miller said, pointing to accidents that occurred during adverse weather.

“We can educate all we want, but we can’t deal with Mother Nature,” he said.

The FCSD is conducting a series of high visibility enforcement patrols around the county.

The patrols are not directly related to the latest series of fatal crashes, Miller said.

The FCSD applied for grants to fund the special patrols earlier in the year.

Grant money came from the Ohio Department of Public Safety. It pays for overtime for FCSD deputies to conduct the patrols, and for fuel for their vehicles.

Miller said ODPS dictates when and where such patrols are conducted.

The first such patrol was conducted from 9 pm, Saturday, Oct. 27, to 3 am the following day, in the northeast section of the county.

During the special enforcement period, deputies made 16 traffic stops, which resulted in three traffic citations.

No motorists were found to be under the influence of alcohol.

Miller said the overtime cost for the special patrol was about $260.

Miller said the next high visibility enforcement patrol will take place Friday and Saturday, Nov. 23-24, from 9 pm to 3 am.

Deputies will concentrate their efforts around the communities of Wauseon and Delta.

Deputies will look for motorists violating traffic laws and impaired drivers in an effort to reduce the number of crashes in Fulton County.– David Pugh