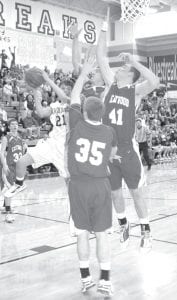 Hosting their final home boys basketball game of the year, the Archbold Blue Streaks went out in flying colors.

“This was a great game for our seniors to finish up at home,” said Doug Krauss, AHS head coach.

Behind the scoring of seniors Sam Miller and Christian Goering, the Streaks jumped out to a 27-9 lead.

Miller started the scoring on a jumper, but it was Goering who lit the nets on fire. Goering hit his first five shots of the night, all from three-point land, and ended the first quarter with 15 points.

“We came out shooting right away,” said Krauss. “Sam and Christian– they were just on fire. When Christian sets himself and gets in rhythm he is pretty good.”

Goering led all scorers with 15 points. Miller added 14 and Garrett Morton chipped in 11. 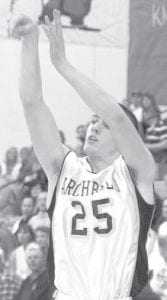 Christian Goering gets off a shot against Eastwood. The AHS senior scored 15 points in the 61-45 victory.–photo by Scott Schultz

Eastwood made a run at the Streaks late in the third quarter, closing the gap to 48-40 when Faykosh banked in a three at the buzzer.

It was all Archbold in the fourth. Morton scored on a jumper to start the final eight minutes. Jon Juergens added a deuce for the Eagles, but it was only one of two field goals the Eagles would score in the period.

The Streaks put up the next 11 points and capped off their 15th win.