Farmers Ready To Leave 2019 Behind 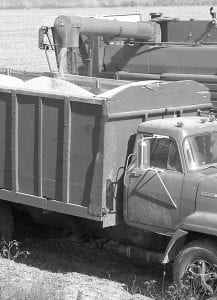 Soybeans are loaded into a truck in 2010. Harvest season is late this year, due to a wet spring. Many farmers elected to forego planting in 2019, choosing to make claims against their crop insurance instead.– Buckeye file photo

This year has presented more than its share of challenges.

A wet spring delayed planting to the point that some fields were never planted.

A trade dispute with China dealt a blow to the soybean market.

Crop insurance and federal emergency payments held out a lifeline to many.

“Generally, I think most of those payments have been made,” Richer said.

“Some of the trade tariff money– only half of it has been paid to date. Another 25% is going to be paid, and the final 25% is yet to be determined.

“We were told the final payment is going to come in 2020.

“There were also some of what were referred to as ‘top up’ payments that many farmers received in September and October, which has been a real blessing because the farm bill payments, which are known as the farm safety net, paid about 5% to 10% of what it has been in the past.

“So the market facilitation program payments and the top up payment collectively are going to be a saving grace for many of our farmers who were anticipating a bigger farm bill payment, but just didn’t get it.

With planting delayed, the number of acres planted, especially for corn, was down significantly.

Based on five-year averages, the number of acres planted with soybeans was 75% to 77% of average.

The number of acres planted to corn was 40% of usual.

Farmers have started harvesting soybeans, “but probably none since (Friday) Oct. 25,” he said.

“We got a significant rainfall event on the night of Oct. 25, and really, through that weekend, it was pretty blustery.

“We got another inch and a quarter last Wednesday that was not good for anybody.”

He estimated maybe onehalf to two thirds of soybeans have been harvested, with yield reports of between 50 and 55 bushels per acre.

Last year, the county average for soybeans was 54.5 bushels per acre.

“So, surprisingly, we’re going to be really close to the county average, notably due to the right amount of moisture and heat in August and September of this year,” Richer said.

“I think guys are pleasantly surprised with their soybean yields.”

The only corn harvested so far is that cut for silage, for later use as animal feed.

“All of the corn that’s going to be cut for silage is pretty well wrapped up. There might be a field or two here or there,” Richer said.

“I would say the vast majority of our corn for grain is yet to be harvested.

“What we’re waiting on now is a combination of field conditions to dry and corn moisture to come down a little bit. I think here in this first week of November, once field conditions dry out, they’re ready to harvest.”

With late planting, “harvest is easily four weeks behind our normal.”

Prices paid to farmers for both commodities has been what Richer called “range bound.”

He described range bound as prices being confined to a narrow range, with limited movement up or down.

“I think (for soybeans) there’s less of a price story than a delayed harvest story,” he said.

There are generally two types of farmers in the county now.

“There are some operations that are under a tremendous amount of stress,” he said.

“On the opposite end, you have some farms that have prepared for this down year without even knowing it was going to happen. They’ve been able to grow and diversify, and they’ll be alright into 2020.”

Those in stressful situations “should review their farm financial records and talk to family about their position, because more than anything we want guys to be in good mental health in 2020.”