Farmers Made Progress, But Rains Shut Them Down 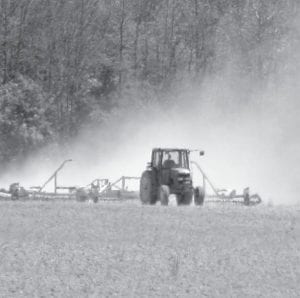 A farmer stirs up a cloud of dust working a field east of Archbold. A break from rain last week allowed farmers to make progress in getting corn crops planted. Heavy rains on Memorial Day, plus rain predicted for this week, will shut down operations again, predicted Greg LeBarge, Fulton County Agricultural Extension agent. –photo by David Pugh

County farmers made good progress during last week’s good weather, but heavy rains on Memorial Day, plus rains predicted for this week, have shut down planting again.

Greg LaBarge, Fulton County agricultural extension agent, said he anticipated farmers wouldn’t be able to get into their fields until Thursday, May 27, but he saw tractors working the ground as early as Tuesday, May 25.

Wauseon and the central portion of Fulton County missed a shower on Thursday, so farmers in those areas were able to keep going.

Work in the fields continued until midday Monday, when thundershowers brought heavy rain to the area. LaBarge said rainfall reports varied from one inch to more than three inches.

But during the few days of good weather, “we made significant progress. I’m not sure of the numbers, because people were in the fields, not calling me,” he said.

“A lot more crops are in the ground,” he said.

Now, farmers who haven’t gotten their corn crop planted might want to strongly consider switching to soybeans “unless corn is needed for feedstock on the farm, or we’re planting late corn for silage,” he said.

The weather forecast for this week does not look promising for fieldwork, with rain forecast for Wednesday and Thursday, June 2-3.

“We’re into another persistent pattern of rain,” he said.

The corn crop that’s in the ground looks pretty good.

There are some unevencolored corn plants, and there are parts of fields damaged by standing water.

“There are some decent fields,” he said.