Family Of Ducks Living At Fairlawn 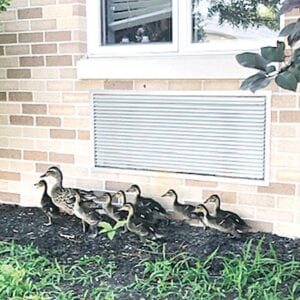 Some residents of the Fairlawn Haven Retirement Campus have enjoyed watching this family of ducks, which lives in one of the courtyards at the facility. Top: The mother duck and most of her 10 ducklings. Below: The baby pool that was modified for the baby ducks. “We must be a very nurturing environment,” said Mari Yoder, Fairlawn Director of Development.– courtesy photos

It seems Fairlawn Haven is a very duck-friendly facility.

After 10 baby ducklings were rescued from a storm sewer grate at the Fairlawn Haven Retirement Campus, Thursday, May 14, another duck family (or possibly the same ones?) was spotted living in a courtyard at Fairlawn.

Marilyn Yoder has a room at Fairlawn with a window that faces out into the courtyard. She’s been watching the babies grow, adding she has a lot of helpers on the duck watch.

“Several of us here in the room, we’ll point them out to each other,” she said.

She first noticed the ducklings about four, maybe six weeks, ago.

“We saw her (the mother duck) walking around with 10 little ducklings,” she said.

“The mother is a mallard. I recognized her.”

The ducklings had some brown feathers, but “were mostly yellow. That was early on in their life.”

Mari Yoder, Fairlawn Director of Development, said Mark Lemley, a member of the maintenance staff, created a pool for the ducklings out of a baby pool and a wooden board for a ramp. 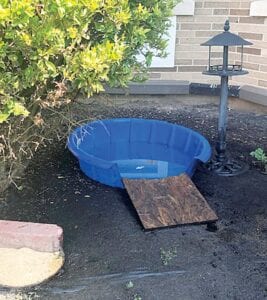 Lemley, by the way, was part of the team (which included his daughter Evalyn, and Brice Meyer, a police officer) that rescued the ducks from the grate in May.

“We are going to start calling him ‘the duck whisperer,’” Yoder said.

The Fairlawn staff has been leaving food for the family, as well.

When the babies started their lives, they followed the mother duck around the courtyard.

As they grew older, they tended to huddle around the mother duck.

Now they are more independent, moving about on their own.

The last couple of nights, the mother duck has been spotted on the roof making a honking sound, as if she’s calling them.

“Like she wants them to come up with her and see the rest of the world,” Marilyn said. Leaving

Soon the ducklings will be grown and fly away to start their own families.

Will that be kind of sad for the duck watchers at Fairlawn?

“Yes, it will be empty when we don’t have our baby ducks anymore,” Marilyn said.–David Pugh