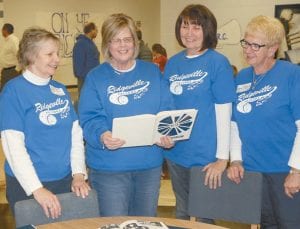 AHS boys basketball teams, cheerleaders, and coaches donned the uniforms of RHS and took to the floor as the Ridgeville Falcons.

The night honored the Ridgeville School District, which was consolidated into three area school districts, including Archbold, in 1969.

At least five members of the Class of 1969, the last RHS graduating class, were on hand, and were pleased with Falcon Night.

“I think it’s a good thing to remember these little schools that were consolidated into these big schools,” said Nancy (Homan) Buehrer.

Nancy (Meyer) Glaser said it was obvious AHS put a lot of work into Falcon Night.

“I was here when they were setting up some of the memorabilia and they really put a lot of time and effort into it, to bring back some of the teachers and some of the graduates. I think it was very good,” Glaser said. 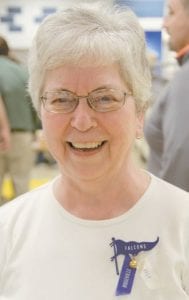 “The crowd was huge, and the parking lot– I couldn’t believe it. When we came in at six o’clock, we had to go clear to the back row to park,” said Karen (Behnfeldt) Lulfs.

Was it a nice honor for Ridgeville Corners?

“Everybody is very appreciative of it. For weeks and weeks, it’s all we talked about,” he said.

Ripke said when Ridgeville people were called to the gym floor to be recognized, there were “a good number of people here I haven’t seen for 40 years, probably.

“And they all look the same.

“This is a great thing Archbold High School did, and I’m glad to see such a nice turnout for it.”

“I’m very delighted, very impressed with what Archbold High School did for us,” Rupp said.

Karen (Gerken) Maassel, RHS ‘64, said the event was “wonderful. The Archbold people really went out of their way.

“They got photos, and the yearbooks, and all the clothes, and the band, and then to recognize everybody (between the junior varsity and varsity games). Wow.”

Maassel sported an original Ridgeville Falcons pin, which she has had since her high school days.

Ila (Sonnenberg) Storrer, a classmate of Maassel, said there have been good turnouts at RHS alumni banquets. She thought AHS did an excellent job with Falcon Night.

“I thought it was great that they let us sing our fight song, and to get on the floor,” Storrer said.

In the early years after the consolidation, some harbored animosity towards Archbold over the loss of their school.

“It appeared that way,” Ripke said. “I think you’ll get that whenever you have a consolidation.”

“After all these years, once in a while over the years you’ll hear something, but that’s just reminiscing, I think,” Ripke said.

Storrer said she thought the damage had been repaired.

“I had kids here in Archbold, and they had done their junior high at the Ridgeville building, so I think everybody is working together, and it’s all for the benefit of the kids,” Storrer said.

“We only had 39 in our graduating class. That’s a big deal for us!” she said.

“Ridgeville School was almost like a family, because it was so small,” Glaser said.

“Everybody knew everybody, so you felt like a family.”