Faith, Support Get Priests Through Crisis 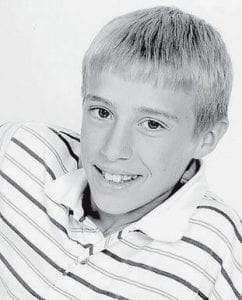 Two days after he was critically injured in a fall from a tractor, Tyler Priest, 13, was going into surgery to have a rod inserted to measure the pressure in his brain.

“At the time, (the neurosurgeons) didn’t know if it would make a difference,” said his father, Bob.

He knew his son was hurting.

“It became very important for me to let Ty know that life is better in heaven than it is here, and not to be afraid. And that if God calls you to go, go; and if he tells you to fight, then you fight, and you fight hard.”

Two months later, as Tyler fights to recover from his traumatic injuries, a deep faith in God and a tremendous outpouring of support from across the United States have helped the Priest family deal with the tragedy.

“We Were Very, Very Fortunate”

Tyler’s mother, Kara, is a nurse for ProMedica Air and Mobile and a community emergency management services educator for volunteer fire departments.

They will never know for sure how the accident happened.

Ty was helping friends, the Oechsle family, bale hay on Sunday, July 6. It was something he loved to do.

Somehow Tyler fell from the tractor into the path of one of the tires. He was run over from mid-chest level to his head.

“I think Mr. Oechsle, like any other parent, would be like, why didn’t I do this? Why didn’t I see it? I turned around for a little bit; if I wouldn’t have turned around…” said Bob.

“But what Mr. Oechsle has to realize is that he saved Tyler’s life, because Tyler lost a pulse and stopped breathing. But he gave him mouth-to-mouth and got a pulse back.

“I hope if I am ever in that situation that I could help somebody like he helped Ty.

“He knew what to do. It was a bad scene, and to be able to do that, to be able to think that clearly… there were a lot of things that took place that we were very, very fortunate,” said Bob.

It took only a couple of minutes for a rescue squad to arrive. Tyler was then taken by air ambulance to Parkview Hospital, Ft. Wayne, Ind.

Tyler remains in a coma, but is responding to physical and occupational therapy. He was moved to Toledo Children’s Hospital on Monday, Aug. 4 for rehabilitative therapy.

As it heals and he is able to do a little bit more, “Tyler will slowly come out of the coma,” Bob said.

“How long that takes, we don’t know.”

Initially there was confusion whether he had a severed spine, because tests showed he had severed C-1 and C-2 cervical vertebrae.

Seven cervical vertebrae make up the neck; they are among its smallest bones.

“The trauma surgeon that we had is nationally acclaimed. We’ve got one of the best trauma surgeons in the nation, and I don’t think there was a mistake. I think we’ve seen a miracle.

“We had a severed C-1, C-2 and no brain waves, both giving indications of no survival, which is how word got out about Tyler not being able to make it. By Tuesday (July 8) that was not true. There was no C-1 C- 2 severed; we had brain waves. How’s that happen?

“I just think we saw a miracle. Can I prove that to anybody? No,” said Bob.

“People are praying, not just in Van Wert and Archbold, not just in Northwest Ohio… I’ve gotten emails from people in California who happen to have a relative who knows somebody who knows Tyler. He’s on prayer chains in California and Massachusetts, so we’re coastto coast.”

“So many things we take for granted until a crisis such as this occurs. So many people have been there and continue to be there.”

Outside the intensive care unit at Parkview Hospital is a large lobby.

“We took the entire lobby,” said Bob. “That first week, there had to be anywhere from 70 to 100 people there every night.”

So much food was brought in, “we just started offering it to other people. To think how many other people that helped.”

People volunteered to have the girls stay with them.

Special t-shirts. Chicken dinners. Get well cards. Hats from football coaches at the University of Toledo and Ohio State University.

Someone at Marion General Hospital sent a card and a check. The hospital has an organization that helps parents that have to travel with their children when they’re ill or in situations like Tyler.

Tyler’s doctor has a brother who’s a priest in Boston, Mass. On Thursday nights the Catholics on the New England Patriots professional football team have a private mass, and “those Patriots were praying for Tyler,” said Bob.

“Support doesn’t always have to come through money. Tyler’s gonna love the hats and all that stuff, but the best thing that people can do, is just continue to pray.”

Getting Through A Crisis

Their faith in God and the outpouring of support is giving the Priests the strength to deal with the uncertainty of Tyler’s future.

“Faith is what takes the anxiety and worry away. Support allows you to talk with people and to share, and sometimes you laugh and joke, and it’s good to be able to do that.

“To sit up here by yourself all the time can be depressing. People haven’t allowed that to happen. We’ve been very fortunate, very blessed, with so many great people around.

“We’ll get there. We know there is light at the end of the tunnel. We just don’t know how long the tunnel is.”