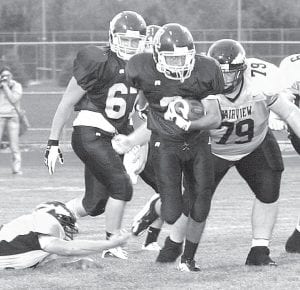 Blue Streak Noah Keefer (2) breaks free for yardage against Fairview. The junior caught a 7-yard pass from Garrett Morton for Archbold’s last touchdown against the Apaches.– photo by Scott Schultz

Whenever a football team faces Fairview, fans can expect a high-scoring, pass-orientated game, and Friday, Sept. 11, was no different after the Apaches rolled into Archbold to face the Blue Streaks.

After a back-and-forth first half that had the Streaks (1-2) holding a 17-14 lead, Fairview (2-1) took advantage of the Archbold turnovers and pulled out the trick playbook on its way to a 47-37 victory.

“The first half was pretty even. They scored, we scored, and we kicked the field goal at the end of the half,” said Bryan Miller, AHS head coach.

“It was a good game. It was a game of swings. We had a good swing to start the second half and then just went downhill.”

“I told the kids at halftime the difference in this game was who was going to make the big play,” said David Robinson, Fairview head coach.

“Archbold came out in the second half and scored. We were able to come up with a fumble and an interception, and that was the difference in the game.”

The Streaks looked to beat the Apaches at their own game, amassing 357 yards through the air.

Leading 17-14 at halftime, Archbold struck first to start the second half. The Streaks scored on a Garrett Morton 3- yard run, and then, just minutes later, Morton connected with Desmond Sleigh for a 43- yard touchdown toss and a 30- 14 lead.

From there it all went down- hill for the Blue and Gold.

Following an exchange of possession, the Streaks had the ball on their own 44-yard line when a bad snap went over Morton’s head. Fairview’s Jeffrey Timbrook recovered the loose pigskin.

Trailing 30-22, the Apaches looked deep into their playbook and pulled off a successful onside kick. Three plays later Mosier connected with Rodney Webb for a 39-yard touchdown toss.

The two-point conversion failed, but the visiting Apaches closed the gap to 30-28.

“The onside kick was big. The officials sorted things out and got the right call,” said Robinson.

Four plays later, Morton threw an interception that Radcliff returned 57 yards for a touchdown and a 34-30 advantage.

The Apaches had put up 12 points in 2:09 and weren’t finished quite yet.

“We had a good start to the second half and had Fairview right where we wanted them,” said Miller.

“We were up 30-14, had the ball and were moving, and then the turnover. It went downhill from there. We made mistakes, but Fairview still had to capitalize on them, and they did.

“The onside kick– we were ready for it. I want to see the tape; everything was kind of jumbled up with the calls, but regardless, they still had to go down the field and score, and they did.”

Facing fourth-and-goal on the 1-yard line at the 8:08 mark of the fourth quarter, Fairview pulled off a fake field goal and Blaine Murray crossed the goal line.

The Apaches added an insurance score with 2:05 left when Mosier threw to Andrew Woenker for a 27-yard touchdown toss.