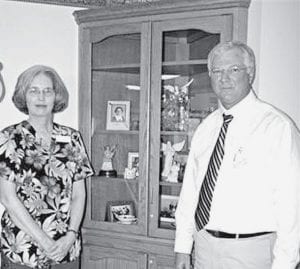 Nancy VanSkoder, coordinator for the Fairlawn Haven Special Care Unit, and Steve Ringenberg, Fairlawn executive director, with one of the special “memory cabinets.” The cabinets provide special care unit residents with a place for family mementos, and help them identify their rooms.- photo by Rita Bilen

Alzheimer’s is a particularly cruel disease, robbing victims of their memories, and even their ability to live independently.

For almost four years, Fairlawn Haven Retirement Community, Archbold, has provided those with Alzheimer’s, and other illnesses that impact thinking skills, with a special place that caters to their needs.

Known as the Special Care Unit, it’s had a positive impact on residents and their families.

With over 10,000 square feet, the unit includes a porch and a garden area, which is fenced for the safety of the residents.

Two bedrooms are private, while four are split, with two residents in each. Rooms are fully carpeted; each has a shower.

There is a keypad at the main door, opened by a code, which changes periodically; other doors have alarms. These are safety features to keep residents from wandering.

The floor plan is partially divided by the nurses’ station and kitchen.

The residents “never want to be in separate areas. They always want to be together,” said Nancy VanSkoder, unit coordinator.

Each resident has a memory cabinet outside of his room. The cabinet serves many purposes, including a place for family memorabilia, and a way for residents to recognize their rooms.

The cabinets are locked because “in Alzheimer’s units, sometimes things disappear,” said Ringenberg.

When asked if the residents are happy to be there, Ringenberg said, “It’s difficult to tell because no one wants to come to a nursing home.

“Once they become familiar with their surroundings, they adjust quite well.”

There is not a long waiting list to get a room in the unit, because, “most admissions come from the nursing home,” Ringenberg said.

Some residents enjoy working in the large kitchen making bread, cookies, butter, and ice cream. All of the residents and staff reap the benefits of the cooking they do.

Are residents permanent? Not necessarily.

“When we come to the point where they need more care and are more bedridden, they will more likely be transferred back to the nursing home.

“It’s a very slow and difficult process to transfer them back. We are really reluctant to move them, but sometimes we have to,” said Ringenberg.

Dementia patients can be difficult to deal with, but the staff of caring and patient individuals has special training.

Staffers are responsible for feeding, showering, and changing residents.

They also plan activities such as devotions, reading, exercising, and going to chapel.

“Having company overrides any activities that we might do,” said VanSkoder. “It doesn’t matter if it’s not their family. Everybody benefits when there’s a party.”

The residents regularly play games, with emphasis on “socializing, having a good time, and feeling like a part of the group,” said VanSkoder.

She also said they reminisce with pictures and cards from the past, because it’s “good exercise for their minds.

“They have a positive sense of self-esteem when they can remember things.”

She said illnesses that bring about dementia are “sad type of disorders, but we try to make every day as meaningful as possible.”