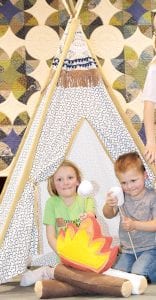 As always, the annual Fairlawn Auction sold a wide variety of items, Friday, March 5. Top left: Kris Jemmott displays an antique baby bed that was donated back to the auction while Charles Nafziger auctions it off. It sold for $250. Top right: Kennedy Ruffer and brother Baden demonstrate a kids teepee and firepit play set, which brought $210. Bottom left: Donna Konst, left, was the winning bidder of a loaf of English muffin bread, the recipe for the bread, and a baking lesson by Alta and Marge Grieser. Nancy Beck, right, was the runner-up bidder. She won a baking lesson and the recipe. The Grieser sisters were willing to donate the second lesson if the bids brought in “enough,”– at least $25. The two top bids brught $675.– photos by David Pugh and Mary Huber

The amount is before expenses.

Yoder thought there was a nice crowd for the two-night event.

“Thursday night was very busy. We had over 500. We felt we probably served almost 550 meals, so that was excellent,” she said.

“Quilts continued to bring less than what you think they’re going to bring” in bids, she said.

“Years ago, they used to bring a lot more.”

People are less interested in acquiring things, she said.

“Gift cards are popular. Some of the experiences– like tickets to things– (auction bidders) are liking that,” she said.

“I was just actually going through some of the things that were purchased, and you know, the candies and the homemade pies, those always do well.

“Things that are for kids do well– things that people can give as gifts for grandchildren or their own children.”

Other than those items, other items sold for “what they’ve done traditionally,” she said.

“We don’t get as many of the handcrafted items as we used to. Part of that is some of those craftsmen have quit making things. 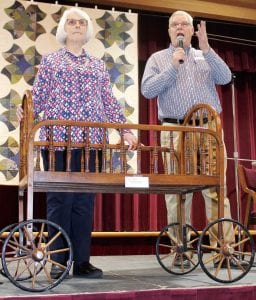 “I am also hearing the younger craftsmen make things for family, but they’re not doing it as much for auctions.

“It’s the same thing with quilters. The younger quilters are telling me that they are often making things for family members; not so much for special events.”

A featured item at the auction was Alta and Marge Grieser’s famous English muffin bread.

The top bidder received not just a loaf of the bread, but the recipe and a baking class in the Griesers’ home.

It was announced the Grieser sisters would give the recipe, and a second cooking class, if the first offering brought in “enough.”

Nancy Beck was the second highest bidder, at $325. She received the recipe and the class, but no bread. 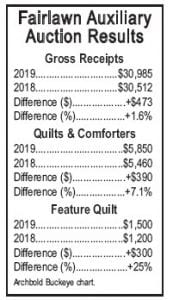 At least two items made a return visit to the auction block.

An antique baby bed, originally purchased for $100 by Fern and the late Ceaphus Schrock at the 1971 Fairlawn auction, was donated back.

A wooden bowl crafted by Lauren Bowman sold for $60. It had made a previous auction appearance.

Yoder said Bowman and his wife, Helen, moved to eastern Ohio to be closer to family.

“It’s fun to see all the people who come and connect with each other, and talk to each other. That’s been very positive.

“That, in and of itself makes it (the auction) such a worthwhile event, to see the community spirit.”