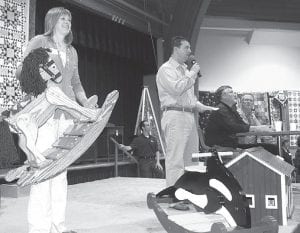 Auctioneer Kevin Frey drums up bids for the rocking horse held by Kristin Nafziger, vice president of the Fairlawn Haven Auxiliary, during the annual Auxiliary auction, Friday, March 30. The rocking horse, one in a long line of rocking horses donated to the event by Bea Briggs, rural Archbold, brought more than $200. Sitting at right, Roger Nafziger and Ron Nafziger, from left, were clerks for the auction.– photo by David Pugh

Gross revenue from the 2012 Fairlawn Auxiliary Auction was $39,505, down about 1.8% from the previous year, said Nanette Buehrer, director of development and community service, Fairlawn Retirement Community.

There is still revenue to come in, so the gap will close, Buehrer said.

Revenue from the auction has paralleled the local economy. In 2007, gross auction revenue set an all-time record, when $42,307.50 was raised.

The Fairlawn Auction is famous for its quilts.

The quilt selling for the most money, a scrappy love ring quilt, went for $3,100.

An Alabama Star quilt, donated by Marg and Alta Grieser, sold for $2,000.

A quilt donated by St. James Lutheran Church which featured a top pieced by a mother and daughter in the late 1930s-early 1940s, then recently quilted and donated by a granddaughter, sold for $1,600.

The rocking horse made by Bea Briggs, featured in last week’s Archbold Buckeye, sold for $220.

A handmade childs table and chairs went for $450; a set of barrister bookcases, stacked three tall, also hand- made, sold for $375.

An amateur photography contest was added this year.

Buehrer said revenue from photos sold was $745. The high bid for the photo judged Best in Show was $130, making total photo contest revenue $875.

“We had lots of great comments about the display (of photos) and how much people enjoyed it, and plan on participating next year,” Buehrer said.

Meals served at the Thursday, March 29 preview and the Friday, March 30 auction raised $7,735.

On Thursday night, 500 meals were served; then more people came in for pie and coffee, she said.

Buehrer said 467 meals were served during the 2011 Friday night auction. This year, the number of Friday night meals was more than 500.

The sale of baked goods and cheeses raised $1,600, while cutlery added an additional $207.

Buehrer said Fairlawn Auxiliary officials were pleased with the 2012 auction, the 47th edition.

On Friday night, “People came for the dinner and stayed. They didn’t move to the chairs up front, they were happy to sit at the tables” in the back of Founder’s Hall, she said.

Basket items continue to be popular. Basket items are put together by combining several small items such as gift cards and certificates into a basket, then selling the items together.

“We have fun coming up with the names for the baskets,” Buehrer said.

It was the third year Fairlawn has prepared an auction catalog. The catalog is assembled Thursday after the final donations come in, then handed out on Friday.

As in the past two years, the catalogs were all handed out, and more had to be printed and assembled.

Buehrer said people from across the county participate in the auction in one form or another.

She said one family has members come in from all across the nation. They make the auction the center of the family reunion.–David Pugh