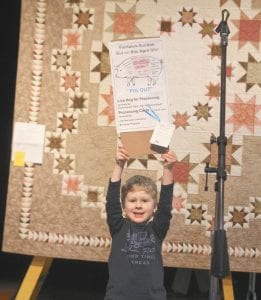 Children were a big part of the Fairlawn Auxiliary Auction, Friday, April 8, with a preview the night before. Top left: Isaac Nafziger, 4, holds up a sign announcing the whole hog and processing that were put up for auction, which sold for $500. Behind him is this year’s feature quilt, titled “Wedding Bands,” which sold for $1,600. The quilt was completed in 27 weeks by women from 11 churches, volunteering 378 hours in quilting. It was pieced by Gwen Kruse, marked by CaraLou Grieser, and bound by Suzie Schrock. Top right: While Bob Frey, auctioneer, drums up bids, Leah Roth, 8, Pettisville, holds a wall hanging. Bottom left: Oliver Nafziger, 18 months, rides the rocking motorcycle that sold for $130. Bottom right: The Fairlawn commemorative plate, crafted by Mark Nafziger, potter at Sauder Village. It sold for $250.– photos by David Pugh and Mary Huber

Winzeler said the amount raised this year was comparable to 2014, when the auction generated $35,453.93.

She said the decline was due in part to the weather forecast for Friday night, when two-tenths (.2) of an inch of rain and 1/2-inch of snow fell. 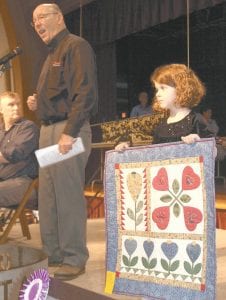 Thursday and Friday dinner donations were up $1,000 over 2015. About 100 more people were served during the Thursday preview than last year.

The handcrafted commemorative plate recognizing the 50th anniversary of the auction was purchased for $250 by a local resident. It was donated back to Fairlawn.

Konst is the co-owner of a hog farm.

During the course of the evening, 18-month-old Oliver Nafziger would walk up to the stage area and climb on the rocking motorcycle that was for sale.

After being removed from the toy, the determined boy would return, and rock on. 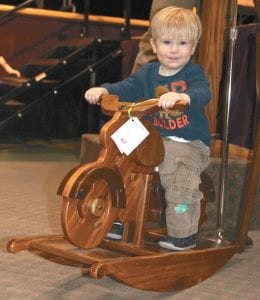 After it sold, Mark Frey, one of the volunteer auctioneers, delivered it to Oliver’s mother and told her to keep it. 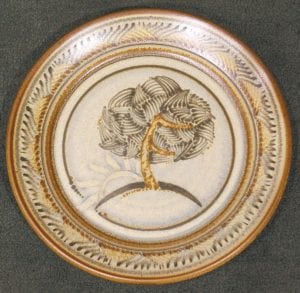