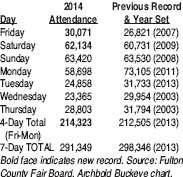 When asked how the Fair Board arrives at its attendance counts, Lynn Kinsman, fair board treasurer, said he could not reveal that information.

He did say the attendance figures take into account both daily ticket sales and season passes.

Wyse said if not for the rain on Monday and Tuesday, attendance may have topped 300,000.

On Monday, Wyse said weather forecasters talked about a storm front that passed through.

When it did, “it didn’t amount to nothing,” he said.

While attendance was down, Poor Jack’s Amusements, which supplies the rides and games, had more sales than in 2013.

It will take a couple of weeks to finalize other financial numbers.

While total attendance was down from last year, the number of incidents handled by the Fulton County Sheriff Department was more than double.

Roy Miller, sheriff, said last year, the department handled 27 incident reports during the fair. This year there were 58, an average of eight per day.

The nature of the reports varied widely, from small larcenies to assault.

Miller said most complaints came in over the Labor Day weekend.

“We just got dumped on,” Miller said.

During the fair, there can be more than 60,000 people in a space about one mile long by about a half-mile wide.

Put that many people in the same space on a hot day and add alcohol to the mix, and there are going to be problems.

New this year was an observation tower in the west parking area.

The tower, white or grey in color, looked like a tractor cab hoisted about 30 feet in the air by a scissors lift.

The U.S. Department of Homeland Security owns two of the towers. Miller said it loans them to events with attendance of more than 40,000.

Miller said he asked for the use of a tower, and his request was granted.

The tower was not manned at all times, but since the windows were tinted, no one knew when or if it was manned.

A technician from Homeland Security was dispatched with the tower to operate the cameras.

“One night, we watched a guy walking around the parking lot for an hour and a half, looking at cars, until we realized he was looking for his own car,” Miller said.

There were no break-ins to vehicles parked in the west parking lots, but there were two or three break-ins reported in the north lot, where there was no observation tower.

Next year, Miller said he would like to use the observation tower again, but with a remote link to the sheriff department.

That way, dispatchers can keep an eye on the cameras, so a deputy is not taken off the fairgrounds.

Next year, he said, there are plans to build a permanent cell tower across St. Rt. 108 from the fairgrounds.

Wyse said there were no major problems this year, although fair board members saw things that perhaps could be done better or differently.