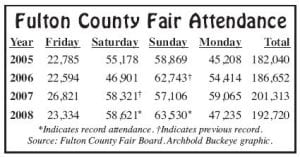 The new Saturday record is 300, or about a half of a percentage point, higher.

Attendance for Friday and Monday were down from previous years.

Carl Buehrer, president of the Fulton County Fair Board, said it’s hard to determine what’s going on with crowd numbers.

In the past, he said, it would seem one group of people would leave the fair, then a new group would arrive. That hasn’t been happening this year, he said.

"The weather has been excellent, just a little bit hot, nothing unbearable, and there’s a nice breeze blowing," he said.

The Archbold Water Treatment Plant recorded high temperatures ranging from 88 degrees to 95 degrees during fair time so far this year.

Buehrer attributed part of the all-time high-one day figure to the sellout crowd for The Beach Boys, a nationally-famous recording group that traces its roots back to 1961.

"It was an excellent show," he said.

The four-day attendance total (Friday, Saturday, Sunday, Monday) for this year is 192,720.

When asked if the current diffi cult economic times were hurting the fair, Buehrer said some of the merchants reported sales were up 4% to 5%. However, people have changed their buying habits. Buehrer said one retailer who sells fudge reported she had more customers, but many are buying a halfpound instead of a full pound.

"It depends on the product. (People) are not throwing their money away," he said.- David Pugh