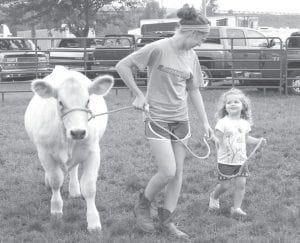 The Fulton County Fair means 4-H, food, and fun. Clockwise from top: Neila Kinsman, a freshman at Archbold High School, and Aspen Brehm, 2, Fayette, exercise Aspen’s calf, “Puddin'”; Bradly Lawrence, at left, and Kain Tuckerman, 2012 AHS graduates, enjoy a couple of funnel cakes; J.J. Gericke, 7, and Addison Ziegler, 8, both of Archbold, take a ride on the “Sizzler”; and Elizabeth Wiemken, a senior at AHS, stands with her horse, “Dot.” The fair runs through tomorrow, Thursday.– photos by Mary Huber

That figure is off from the same Friday-through-Monday period in 2011, when 192,910 gate admissions were recorded. 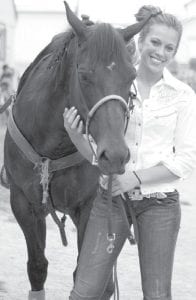 Attendance on Labor Day 2011 was a record for a Labor Day Monday and for single-day attendance, when a total of 73,105 people went through the gates.

Buehrer said there have been no problems from the swine barns reported.

This year, pigs have been suffering from the H3N2v virus, which can be passed to humans. Several Ohio counties have reported people becoming ill after having contact with pigs at fairs. 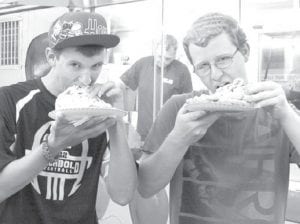 That problem reached Henry County earlier this summer, where pigs became ill, followed by some of the youngsters who showed pigs in junior fair competition.

Other aspects of the fair are not experiencing any problems, Buehrer said.

However, Buehrer said there have been some bugs with the parking situation.

This year, a new group was taking over management of the parking lots.

“We got a little bit of a problem; we’ve got some bugs with that,” Buehrer said.

“But now that everyone is aware of it, we’ll get that worked out.”

Several persons have complained about problems with cellular telephone service at the fairgrounds.

Buehrer said one company said it was the result of so many people in the area trying to make and receive calls.

Another cell phone company’s calls were getting through with some delay.

Buehrer said fair board officials will look into the possibility of having a temporary cell tower brought to the fairgrounds next year.– David Pugh