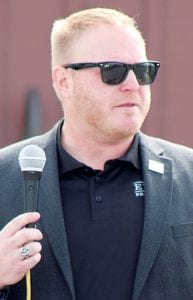 Accompanied by the thunder of 225 motorcycles, the semi carrying The Eyes of Freedom, a tribute and memorial to members of the U.S. Armed Forces, arrived at the Museum & Welcome Center of Fulton County, Friday night, May 10.

On Saturday, dignitaries, public officials, and members of the general public officially opened the display of paintings of the men of Columbus based Lima Company, who were killed in combat in Iraq.

Bill Rufenacht, Fulton County commissioner, said in the first two days The Eyes of Freedom was open, Saturday and Sunday, May 11-12, about 500 people went through the exhibit.

He said on Monday, those who visited the memorial included 63 students from the Evergreen School District. More students are expected during the week.

During the opening ceremony, Mike Strahle, executive director of The Eyes of Freedom project and a Lima Company veteran, described the arrival of the memorial. 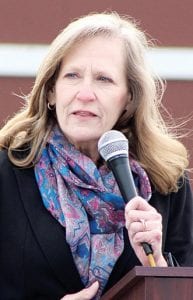 The semi, escorted by motorcycles and law enforcement, passed through Swanton, Delta, and Wauseon before arriving at the museum.

“We’ve reached about 300 communities since 2008, and we will continue to do about 30 events a year for the foreseeable future,” Strahle said.

“It’s the patriotism that we saw last night in three of our northwest Ohio towns… that will continue this for years to come.”

Lima Company, a U.S. Marine Reserve Unit, was sent to Iraq in 2005 to battle the Iraqi insurgency.

“There was a lot of ugliness that was happening in western

Iraq, and we’re fortunate as a nation that we have a standing army to make sure that ugliness stays over there,” he said.

“A lot of that ugliness is very, very unknown to the American people, and thank the Lord for that, very much. Thank all the men and women in uniform for that.”

Things were going well for Lima Company, but 14 years ago to the day, the vehicle in which Strahle was riding was struck by a roadside bomb.

Even after the semi carrying The Eyes of Freedom traveling memorial entered the parking lot at the Museum & Welcome Center of Fulton County, some of the 225 motorcyclists escorting the tribute continued to stream in. The entourage was escorted from Toledo through eastern Fulton County by law enforcement officers.– photo by David Pugh

Strahle was seriously injured, but recovered.

Six other Marines in the vehicle did not.

Before Lima Company left Iraq, 23 men had been killed.

Anita Miller, an artist then living in central Ohio, spent 2 1/2 years painting the portraits of those lost “because she’s the biggest patriot I’ve ever met,” Strahle said.

When soldiers are lost, “you know there’s a mom or there’s a dad, or a spouse or there’s children that are touched,” she said.

“And it’s not just the families. It’s whole communities that are impacted by one service member who has lost their life.”

The ripple effect of the loss of life goes on, touching hundreds or thousands of people.

The fear, she said, is that those lost will be forgotten.

“But because of exhibits like we have here today… I know that Lima Company– those losses will never be forgotten. Those Marines will always be kept fresh in our minds because of the way they are captured on these canvasses,” she said.

Displays like The Eyes of Freedom “help us remember that these are not the only losses Ohio has had,” she said.

“These are not the only losses (to war) that our nation has experienced. And it’s not just this war.”

Rufenacht said people going through the display have been quiet and contemplative.

He said one 12-year-old boy told his grandmother he didn’t want to see the memorial.

The next day, that boy was back. This time, he was with his father, who, the son said, had to see the exhibit.

“That’s an interesting take from a 12-year-old boy,” Rufenacht said.

The Eyes of Freedom remains on display until Saturday, May 18.–David Pugh