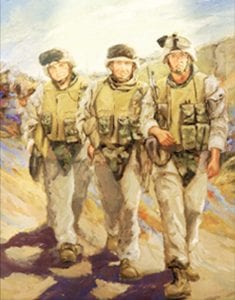 From left, these three men– William Brett Wightman, Edward Schroeder II, and Grant Fraser, U.S. Marine Corps reservists– were killed in action in Iraq. They were members of Lima Company, a Columbus-based unit that suffered particularly heavy casualties in 2005. An artist painted several large portraits of the Lima Company Marines who died and developed an exhibit known as “The Eyes of Freedom” to honor them and all U.S. veterans. The exhibit will be open to the public May 11-18 at the Museum and Welcome Center of Fulton County.– courtesy photo

In a large painting, three young men– three U.S. Marine reservists– walk toward you, their faces stunningly real and lifelike.

One smiles, his eyes alight, looking as though at any minute he will greet you, offer you a solid handshake, and start a conversation.

That conversation will never take place, because he is– was– William Brett Wightman, and he, like more than 20 others from Lima Company, a Marine Reserve unit based in Columbus, lost his life in Iraq.

Mike Strahle, a Bryan native, knows the story, because he lived it.

Deployed in Western Iraq in 2005, Lima Company was involved in the search for the Iraqi insurgency, going house-to-house, traveling dangerous roads.

“There were two or three incidents where there were mass casualties taken on our behalf,” Strahle said.

“I was in one of them. I got hurt real bad, and I made a full recovery, but we lost six guys on my vehicle.

“The subsequent roadside bomb months later was twice as big, and we lost 14 men on that vehicle.”

Because Lima was a reserve unit, most of the men were from Ohio, and since it was based in Columbus, many were from central Ohio.

The deaths of the men from Lima Company shook that region of the state. Anita Miller

An artist living in Westerville, she was touched by the story. She wanted to do something to help the families of the fallen Marines.

But she didn’t know what.

“But she eventually had a vision, really, kind of in the middle of the night, of these life-sized portraits” of the men whose pictures she’d seen in the newspapers.

She worked with the families for 2 1/2 years, eventually painting large life-size murals of 23 men of Lima Company.

The paintings she created were put together into an exhibit, and became known as the “Eyes of Freedom.”

The Eyes of Freedom exhibit was displayed around the country, even traveling to Wauseon once before.

But, the exhibit wasn’t reaching as many people as it could.

Strahle got involved in 2011, and since then, the pace of travel has picked up.

On Friday, May 10, the Museum and Welcome Center of Fulton County welcomes “The Eyes of Freedom.”

A large motorcycle escort will lead a semi carrying the exhibit to the building.

The Museum and Welcome Center is located north of Wauseon on State Route 108, across from the Fulton County Fairgrounds.

It honors the men of Lima Company who gave their lives in service to their country.

Beyond that, it honors all veterans.

Strahle said veterans will look into the portraits, and perhaps not see the men of Lima Company.

“They’re thinking of somebody they’re missing. To see that unfold is pretty special.”

If there’s a fellow veteran standing nearby, “a lot of times they will open up and start talking about things they may not talk about to their families– even their own kids,” he said.

The exhibit also calls attention to veterans who suffer emotionally from their experience.

Many have struggled and taken their own lives.

Reaching those who suffer, and getting them to a place where they’re ready for help, “we can be the connector, and that’s what we’re wanting to do,” he said.

Civilians– those who have never served in uniform– can’t truly understand a veteran’s experience, but yet, Strahle said civilians react to the exhibit as well.

They may not fully understand the military experience, but they can appreciate it.

“There are many people out there who want to be able to thank military men and women for their service, and they have no idea how to do that,” he said.

“When we (Eyes of Freedom) set up shop, you know, we’re giving everyone that opportunity.”