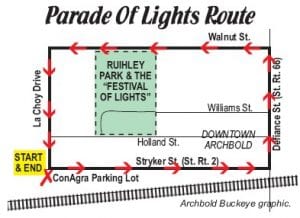 The number of entries for the 19th annual Parade of Lights is now up to about 30, “and they continue to roll in,” she said.

The weather forecast for the parade and the opening of the 29th annual Festival of Lights in Ruihley Park is perhaps a little “iffy.”

On Monday, the National Weather Service website was calling for a 30% chance of showers early Friday night, with temperatures in the 40s.

Brentley Lothamer, a meteorologist with the NWS Northern Indiana office, said a forecast for Friday issued on a Monday is less than 100% accurate.

“It’s definitely not set in stone. We can go out one or two days at most,” he said.

He recommends keeping an eye on the forecast over the next few days.

Rain or shine, Santa Claus will make an appearance in the parade.

Returning is Wayne Newman and his antique tractors, which he decorates with lights.

Krueger said Newman had been in most, if not all, of the parades dating back to 1989. He missed the 2016 parade because of a fire in the barn where he keeps his machines.

More entries are also coming in for the annual Lite the Nite 5K Run.

She said the groovy newsboy hats, which she called, “tacky, but cute,” have been delivered and are ready to go.

The route for the parade is unchanged from the last several years. Parade units are organized in the ConAgra parking lot, then proceed east on Stryker Street to the intersection with North Defiance Street, where it turns north.

The parade passes through downtown to the Walnut Street intersection, where it turns left and makes its way back to the west, past Ruihley Park and the Festival of Lights. The parade turns south on La Choy drive back to the ConAgra lot.

Archbold police will shut down traffic, including sev- eral cross streets, for the event.

Krueger said the one thing she needs is volunteers.

“When there are more people helping, it doesn’t feel like hard work,” she said.