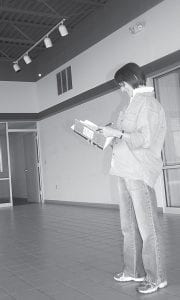 Lisa Bumb makes some notes while looking over the showroom of the former auto dealership building she and others plan to turn into the Top of Ohio Center for the Arts. The facility will eventually offer art classes for children and adults. She expects to open part of the building during the Christmas season.– photo by David Pugh

Most persons look at a vacant auto dealership building, and see a vacant building.

She saw not a vacant building, but a center for the arts.

To that end, she, with the help of others, has created a new entity, the Top of Ohio Center for the Arts.

As she walks through the former Yark Automotive dealership building on Archbold’s south side, the former showroom floor becomes a gallery. Salesmen’s offices turn into classrooms. The shop area becomes workshops for what she calls “the messy arts” such as metal sculpture, ceramics, and glass.

“It’s a little scary, but it’s not anything that isn’t manageable,” she said.

Bumb, a 27-year Fulton County resident, is herself an artist. She began painting at 13 as a child in Mansfi eld.

She married Michael Bumb, who is Fulton County’s juvenile and probate court judge. The couple settled in Wauseon, and began raising their six children.

During that time, she did watercolor paintings.

“You could go into any discount store, buy a tray of eight watercolors, and start painting. Acrylics and oils (paints) are much more expensive,” she said.

She has sold some of her works, and had others shown at the Toledo Museum of Art. She volunteered in the art department at the Fulton County Fair.

During the years, she put money back for a dream: to create a center for the arts.

For seven or eight years she looked at several buildings and opportunities, including the Elm Street School in Wauseon, a building that was later demolished.

About a year ago, she and her husband moved to Archbold to be closer to family.

At first, she said she thought, “The kids are grown. I should be sitting, painting watercolor after watercolor.”

But then, something told her, “No, you’ve been given a gift; you should share it.”

She drove by the former auto dealership and thought, “Why not do a center for the arts here?”

Through a local real estate agency, she worked with Steve Wyse, owner of the building.

“I haven’t found a kinder man on the planet,” she said. They worked out a lease arrangement, which, right now, Bumb is funding out of her savings.

Bumb said, “From the moment you open your eyes, or flip on a radio, you’re surrounded by art.”

Studies have been done, she said, showing exposure to art improves the quality of life.

“Art brings joy to life. Art is a mainstay. There’s a billion dollar industry in art. There’s no reason northwest Ohio isn’t a part of that,” she said.

The first project for the Top of Ohio Center for the Arts will be the holiday season, when the center will sell art objects for gifts.

Later, she plans to open the Wiclow Gallery Shop, named after the county in Ireland where her family has its roots. It will be a place for artists from Northwest Ohio to sell their work.

Eventually, the center will offer workshops and classes for all ages.

Since the building is on five acres, including a large grassy area, outdoor festivals could be held.

“There could be music, artists, vendors– it’s a nobrainer,” she said.

Bumb said the Top of Ohio Center for the Arts will cover the four-county area, partly because of Archbold’s central location. As she assembles the center’s board of directors, she will reach out to people from each of the counties.

She’s filed the necessary legal and business paperwork and has been making contacts with legislators, chambers of commerce, the Black Swamp Arts Council, and the Henry County Arts Council.

As for artists, Bumb said there is an abundance of art talent in Northwest Ohio.

“This isn’t about me,” she said. “It’s about building something for the next generation.”