Ex-Burger King Will Be Pizza Restaurant 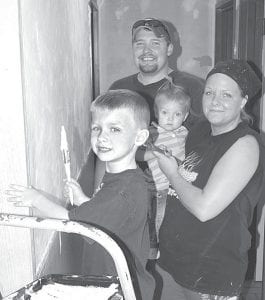 The Kidston family is working in the former Burger King restaurant, which they will turn into Blaze & Babes Pizza. They have operated a restaurant under the same name in Pioneer for seven years before expanding into Archbold. At front, with a paint brush, is son Gage, 5. Next is Terra, holding daughter Gisele, 1 1/2. At the rear is Alex. The family hopes to open the family-themed restaurant Jan. 1, 2011. –photo by David Pugh

A new family-style pizza restaurant coming to Archbold owes at least part of its existence to the 1996 Archbold High School basketball team.

“I played against the 1996 team, with the Roth boys (Keith and Shaun). It was the last game of the season. We were both undefeated.”

“But even after that, I remember Archbold as having quality athletes and quality people,” he said.

Terra, his wife, said members of their family had moved to Archbold, and loved the town.

Fast-forward to today. The Kidstons have operated a successful pizza restaurant in Pioneer for seven years, but his family has been involved in catering for 15 years.

The Kidstons’ restaurant is known as Blaze & Babe’s Pizza. The “Blaze” part is an anagram of the names of immediate family members: Bob, Linda, Alex, Zack, Elizabeth. The Babes part comes from Alex and Terra’s two children, Gage, 5, and Gisele, 1 1/2.

The Kidstons wanted to expand their operation, and thought of Archbold.

But they didn’t base their entire decision on that one basketball game.

“We crunched a lot of numbers,” Terra said.

Alex said many restaurant chains base their decisions on demographics. If a town is considered too small, they won’t put an operation there.

“But it’s not all formula,” Alex said.

For example, Pioneer has 1,400 residents, yet supports not one, but two pizza restaurants.

In addition to Archbold’s resident population, the village has a large workforce.

“It’s stable and economically diverse. It looks like it’s run right, and it’s a clean town,” he said.

The couple said they looked at a couple of locations in Archbold, and ended up selecting the former Burger King restaurant building, which has been vacant since October 2008, when the fastfood operation closed.

The couple closed the real estate transaction on Thursday, Sept. 2. The following day, they were in the building, starting to work.

“Basically, it will be a dinein restaurant. There will be a seven-day buffet, hot and cold, with fresh salads.”

“Our plan is to be a very family-oriented restaurant, but we will have a beer license to sell pitcher beer,” he said.

Right now, they’re in the process of giving the building “a complete facelift,” Alex said.

Signs for the outside have already been ordered.

With the exception of one stainless-steel table, all of the former Burger King equipment will be removed and traded in to a restaurant equipment broker.

Right now, the Kidstons are doing much of the work themselves. Alex said in addition to a couple of houses, he built the last Blaze & Babes. On Friday, Sept. 24, Terra was wielding a paintbrush.

Alex said he wants to subcontract work “to local guys.”

Blaze & Babes in Pioneer employs 15 persons. The couple plans to employ as many as 20, maybe even 25 workers in Archbold.

One thing the Kidstons stress– they have been made to feel welcome in Archbold.

Gage already attends school in Archbold, and the couple is buying a home here.

“We’re jumping in with both feet,” Alex said.

“We’re excited to become a part of the community.”