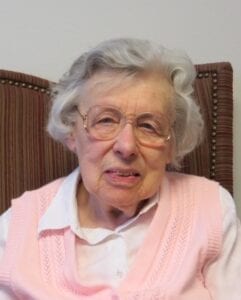 Esther Anna (Bock) Rice, of Archbold, passed away peacefully on June 20, 2020, at the age of 100 at Fairlawn Retirement Community, after spending the day sharing favorite memories with her beloved children.
She was born March 26, 1920, the daughter of Reverend Albert and Lydia (Buehrer) Bock in Beulah, N.D., where Albert and Lydia ministered to the local population.
Upon the death of her father in 1925 of scarlet fever, the family moved to Archbold.  She graduated from Archbold High School and from Heidelberg College in Tiffin.
After college, she became a schoolteacher and taught English for four years in public school.
She married Clyde Rice in December 1945, and they raised their family on their farm near Pettisville.
Esther was a talented musician who taught over 700 young people and adults to play the piano and violin.
She also served as organist for the St. John’s Christian Church in Archbold for over 60 years, and was active in the women’s activities and maintaining the church library room.
She was active in the Northwest Ohio Piano Teachers Association.
She also worked for eight years in the Wauseon Public Library and for 15 years in Fulton County Historical Museum.
She also volunteered at Care & Share and in the grade school as a tutor.
In recent years at Fairlawn, Esther continued to play piano for chapel services.  Esther especially enjoyed music, reading and travel.
She is survived by two sons, Stephen of Los Angeles, Calif., and Andrew (Alice) of Westerville; three daughters, Marlo Seligman of Menlo Park, Calif.; Rachel Rice of Salida, Colo.; and Barbara Rice Maluso of New York City, N.Y.; and one grandson, Brian Rice (fiancée Rachel Sylvester) of Westerville.
She was preceded in death by her parents; husband, Clyde; brother, Paul Bock; sister, Margaret Phillips; and son-in-law, Peter Maluso.
Memorial services will be held at a later date to be announced. Grisier Funeral Home in Archbold is in charge of arrangements.
The family suggests any tributes be made to St. John’s Christian Church, 700 S Defiance St, Archbold OH 43502.
Online condolences may be offered to the family at www.grisierfh.com. -Posted 6.21, 2:35 pm