Enemies ‘Trying To Test Our Soldiers Every Day,” Says Norden 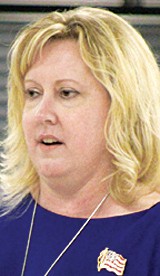 Norden, a Napoleon native, works in the world of national defense, trying to keep the secrets of American military technology secret.

A civilian Department of Defense employee, she works with the companies that make the tools used by men and women in the armed services– the “war fighters,” as she calls them.

She told the audience nothing she would say was classified, “so I won’t have to kill you afterwards.”

“We have adversaries, we have competitors– global competitors– and we have outright enemies that are trying to test our soldiers and our military defenses every day.”

America, she said, is locked into short-term goals.

China, on the other hand, is into the long-term, and its long-term plan is to restore the country as a global power by 2049.

Part of its strategy is “gaining technology– foreign technology– and incorporating it into their economy and infrastructure,” she said.

“They seek out foreign technology, and that could be U.S. technology by both legitimate and not-so-legitimate means.”

In space, she said Russia and China are developing new, impressive capabilities to move satellites into orbit.

“The Chinese and the Russians are all saying this is just for repair, for inspection. But you can imagine some of the military applications of that,” she said.

So many things depend on satellite technology, the cascading effect of disabling satellites could be the stuff of Hollywood movies, she said.

“The country– the leaders– are now wrestling with, how do we approach this new space… do we want to militarize space? That’s a dangerous scenario,” she said.

“But I bring this up just to talk to you about the technologies and what we’re producing, and protecting.”

“The military is having to think forward in ways and keep up in ways that we’ve just never seen before,” she said.

“In my work with the Department of Defense, getting to see what our defense contractors are doing to develop and study the new emerging technologies, I want to reassure you we’re doing everything we can” to protect those technologies.

“It’s my job, and the job of my team, to go to these companies and evaluate the full security vulnerabilities and risks inherent in developing whatever classified technology or platform that they’re involved in.”

Norden described a man she worked with, a new employee, who said he couldn’t be around a microwave oven because of the metal plates in his head.

“Well, he was messing with me, but only partially,” she said.

He was, in fact, an Iraq war veteran, and part of a bomb disposal unit. A bomb left him with 121 pieces of metal in his head.

“He showed me the X-ray of all that metal in his head,” she said.

“To this day, he still laughs at me for buying his microwave story. But I think about that anytime I get frustrated with my work.

“What is a little exhaustion to me compared to what they do for a living?”