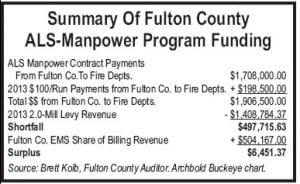 Fulton County commissioners voted to set aside 60 cents of every dollar collected from EMS billing to support EMS services. The remaining 40 cents goes to the county general fund.

Currently, each county fire department receives $100 for each rescue run it makes.

However, Kolb said that’s only if the county collects at least $100 from the bill.

For example, if the county gets $105 from a rescue run bill, the fire department receives $100, and the county keeps $5.

But if the bill generates only $98, the fire department gets nothing, and the county keeps the full amount.

Kolb said in 2013, the county paid the seven Fulton County fire departments $1,708,000 to operate ALS ambulances and provide additional manpower, $299,215.63 more than the county two-mill ALS levy took in. The levy was first passed in 2001.

Over the years, the EMS system account has accumulated about $3.3 million in surplus funds.

The county fire departments and the Fulton County commissioners will begin negotiating new contracts for EMS services starting this fall.