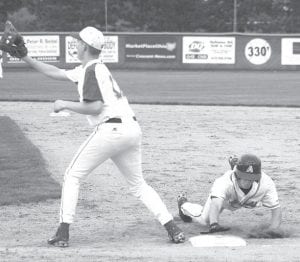 Corey Wyse dives back to first base in Archbold’s Division III district semifinal with Elmwood.– photo by Scott Schultz

Facing Archbold freshman pitcher Tyson Dietrich in his first varsity start, the Royals scored three runs in the bottom of the first inning.

Dietrich struggled from the start, walking leadoff batter Jack Waldock, who then advanced to second on a sacrifice bunt by Jon Bodi.

Cody King tallied a pair of runs batted in with a line drive deep into the Archbold outfield. Trying to stretch out his hit, King got caught in between second and third on a rundown for Elmwood’s second out of the inning.

Trey Marsh reached first on a single and eventually scored on a wild pitch.

The Streaks had two hits in the top of the first, singles by Corey Walker and Sam Miller, but left two runners stranded on base. 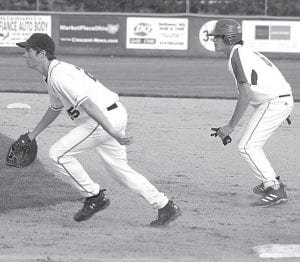 The Blue and Gold (14-11) left a total of six players on base in the contest.

“He just had some control problems.

“They only hit a couple of good balls off of him, and he walked a few too many guys, but he will be a good one for us down the road.” Elmwood scored two runs in the bottom half of the second inning while ace pitcher Adam Tyson was shutting down AHS at the plate.

Besides the two singles by Walker and Miller, Trey Westrick was the only other Streak to register a hit, a double in the second inning.

“We have to tip our cap to Adam Tyson. He has big league stuff,” said Selgo. “He is throwing 90 mile-per-hour fastballs. He has a big league curve ball.

“It’s no wonder Division I colleges are giving him financial aid to pitch for them.

“We got two hits that first inning and played right with them, after we got past those first couple innings, and played a pretty good game. We just couldn’t hit their pitcher.”

Elmwood totaled nine hits. The Royals scored their final run in the bottom half of the sixth on an RBI single by Waldock.

Tyson went the distance for the Royals, giving up no runs on three hits, striking out nine, and walking three.

Dietrich picked up the loss. In 1 1/3 innings he gave up five runs on three hits and walked four.