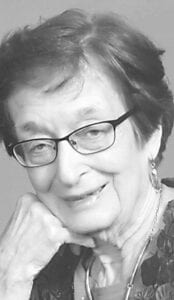 Eleanor (McMunn) Rychener, of Archbold, passed away peacefully on Tuesday, March 2, 2021, after a 2 1/2-month battle with COVID.

Eleanor was born and raised in a Christian home, and she accepted Christ as a young girl.

She spent eight years in a one-room country school in Ogden, Mich., and then graduated from Blissfield High School in 1944.

Eleanor married Dale Rychener in 1951, who preceded her in death in 1987, and they had two children, Christine (Brian) King, who lives in Archbold, and Roger D. Rychener, who passed in 1975. She is also preceded in death by one sister, Dora (Bob) Kelty.

For about 30 years, Eleanor worked for Gendron Corp. as a floor supervisor, and was also very involved in scouting for many years.

Eleanor belonged to Archbold Evangelical Church for over 68 years, where she taught Sunday School and Bible School.

In 1998, Eleanor married Wayne McMunn (who preceded her in death), and they spent their summers in Archbold and their winters in Bradenton, Fla. From that marriage she is survived by three stepchildren, John (Barb) McMunn, Leisa (Lawrence) Onweller, and Kathie (Ken) Hofstra. Also surviving are seven grandchildren, 15 great-grandchildren, and a brother-in-law, Earl (Marilyn) McMunn.

The latest highlight in Eleanor’s life was on Feb. 8, 2021. While recovering at Fairlawn, Jesse Kahler came in and performed a faith baptism for her, after she gladly shared her testimony!

A graveside service was held on Saturday, March 6, at the Pettisville Cemetery at 1:30 p.m. Memorials may be given to Fairlawn Haven, Shalom Ministries, or Archbold Evangelical Church.