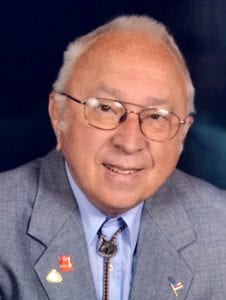 Eldred, along with his wife and sons, worked together to grow their business, Buehrer Power Equipment of Stryker, for 64 years.

Eldred was born in Stryker on April 25, 1931, the son of Virgil and Alice (Wendling) Buehrer.

Eldred was a member of First Lutheran Church in Stryker, where he served in many capacities, such as teaching Sunday School, singing in the choir, member of church council, and former president of the church council.

He was a former member of the Stryker Rotary Club and a Paul Harris Fellow.

He was preceded in death by his wife, Rosella, two great-grand-twins, and brother-in-law, Ted Lovejoy.

Visitation will be held from 2 p.m. until 6 p.m. on Friday, April 26, 2019, in the First Lutheran Church in Stryker. Funeral services will be held at 11 a.m., Saturday, also in the church, with Pastor Richard Buchsteiner officiating. Interment will follow in Zion Cemetery, near Stryker.

The family requests that memorial contributions be given to CHP-Defiance Area Inpatient Hospice or the First Lutheran Church of Stryker.

Online condolences may be offered to the family at www.grisierfh.com. Grisier Funeral Home in Stryker has been entrusted with arrangements.-Posted 4.24, 9:30 pm