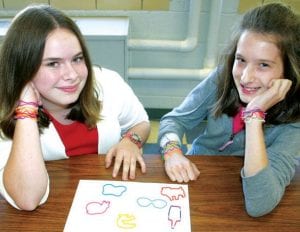 Sara Bilen, left, and Maura Riley, Archbold Middle School sixth graders, with their Silly Bandz, silicone bracelets that assume a shape when removed from the wrist. The shapes on the table are, clockwise from left: a snail, butterfly, bulldog, pair of glasses, ice cream bar, and jack-o-lantern. When asked why they’re popular, Bilen said, “They’re just really cool.”– photo by David Pu gh

If you walk through the hallways of Archbold Middle School, you might see skinny jeans and two-toned hair while hearing the word “legit” this season.

Those are just a some of the trends taking hold at the school.

The teenagers showed the most enthusiasm when talking about Silly Bandz bracelets and Justin Bieber, a Canadian pop singer.

Silly Bandz, colorful silicone bracelets, come in a variety of shapes such as animals, letters of the alphabet, and even Justin Bieber themes.

Once placed over the wrist, they stretch to become a simple band, with a few kinks. When they are removed, they go back to their original shapes. 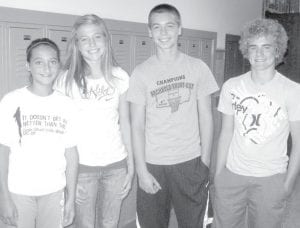 “They just have them going up their arm,” said Manahan. He counted as many as 17 worn by a friend.

Despite their popularity, none of the four students likes the bands.

“There’s too much hype,” said Morton. “I don’t get why people think they’re so cool.”

When discussing Justin Bieber, the guys and girls were split in their feelings on the increasing devotion he’s receiving from teens.

The boys say they listen to all kinds of music. However, says Manahan, “I don’t like his music at all.”

“The girls are obsessed,” said Morton.

“Some of them are called ‘Beliebers,’” said Manahan.

The girls say Bieber’s music is good and that he’s cute.

“My friend’s obsessed,” said Williams. “I’m not obsessed, but I like him.”

The boys tend to keep their clothes casual and wear tennis shoes or canvas shoes. They wear their hair short, even buzz cut.

Girls wear camisole tank tops under v-necks or long vests that flow out at the bottom. Leggings with prints like zebra stripes are also popular.

Natural hair isn’t as common as straightened, dyed, and poofed hair, created by teasing the hair with a comb. Pulling hair back might reveal big diamond-like earrings.

At school, the dress code is fair, say the four teens.

The only complaints were the ban on flip-flops and short pants being restricted to just August, September, April, and May.

Still, the students were understanding, saying flipfl ops can cause a fall.

The four students have personal music players such as iPods, but they would choose a cell phone if they could have any technological device.

Many of their friends have phones with a full keyboard for text messaging.

It’s “a parent rule-thing” that he doesn’t have one, said Manahan. “I sort of agree with them, but at the same time I wish I had one.”

The students said they’d prefer texting over calling or email.

Williams and Short said that when they get a car or moped, they will get a cell phone. They think it’s unfair that younger kids have cell phones.

“I don’t see why they need it,” said Short. “They’re usually with their parents anyways.”

When the boys get a cell phone, they hope it will be a “smart” phone, with extra features like Internet access.

“It’s a laptop and a phone,” said Manahan.

Although texting is more common, use of the worldwide phenomenon Facebook, a social networking Internet website, is on the rise, shoving out instant messaging, said the girls.

Williams doesn’t have Facebook, but the other three students do.

Short says she checks hers every day. Manahan and Morton check theirs a few times a week.

The girls, both on the volleyball team, easily chose sports over video games. The decision was not so easy for the boys, but sports won by a small margin.

Morton said that after sports practice and homework, there is little time remaining for video games – but in a perfect world, there would be.

On weekends, the teens go to sporting events and have sleepovers with friends. Girls enjoy watching romance movies together, while the boys watch action or comedy films, play basketball or whiffle ball, or, if they’re lucky, head to the Cedar Point amusement park.

“When I come home, my parents ask who I am,” said Short.

“I think some people don’t want to break the trends because they might get made fun of.”

On the whole, the school is friendly to individual styles, says Morton.

“I think that everyone has their own trend with them.”

He says his peers can and do create their own personal styles because students are respectful of each other.