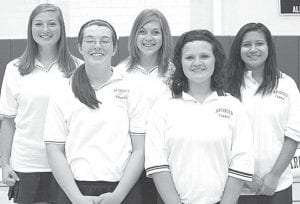 Despite a disappointing season, the experience gained by the five who return could pay benefits this year.

“We have a number of girls returning that either had playing time last season or have shown big improvement to see playing time this season,” said Auzins.

“I am excited about this freshman class because all of them are already showing improvement and the season has just begun.”

Also back are Audrey Lambright, a senior; Marli Fryman, a junior; and Maddy Roth, a sophomore.

The team also features one more senior and seven freshmen.

“The girls are very positive toward each other and are willing to learn from others’ feedback,” said Auzins, who starts her fourth year at the helm of the Blue and Gold.

“Also, these girls are willing to work hard to help improve their overall game.

“It’s always nice for a coach to see her players wanting to get better in any way possible.”

“We have a lot of girls with potential. If they keep working at it, they could see some playing time,” she said.

“It’s going to be a learning experience once again, but with the leadership we have from the upperclassmen I believe it could be a good season.”

The Streaks were scheduled to open their season Monday, Aug. 13, at Bryan.