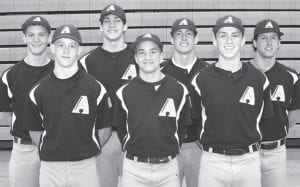 Selgo starts his eighth season at the helm of the Blue and Gold and has compiled a 153-81 record.

Selgo lost five letterwinners to graduation, but is quick to point out that this year’s squad “is a hardworking group that is very competitive. They will give everything they’ve got every time on the field.”

Sophomore Sam Petersen (pitcher-third base, 0.86 ERA, 16 1/3 innings pitched, will miss most or all of season due to injury) rounds out the returnees.

“We should be very solid defensively,” said Selgo.

“We also have some pitchers coming back that were very effective last season.

“However, our hitting and scoring runs will be a question mark. This may be a big factor in how our season goes.”

Archbold is scheduled to open its season, Saturday, March 26, at Ottawa- Glandorf.