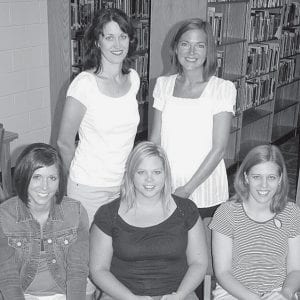 Only six returned the newteacher questionnaire to the Buckeye.

The Stryker native graduated from Stryker High School in 2000. She earned a Bachelor of Science degree in early childhood education at Defiance College in 2003, and a master’s in curriculum and teaching from Bowling Green State University in 2006.

She taught kindergarten for four years and first grade for one at Delta. She was also the Delta High School junior varsity volleyball coach for two years.

Her husband is Hans Burkholder.

Kelly Kruse, who graduated from Archbold High School in 1997, will teach first grade.

She graduated from Defiance College in 2004 with a bachelor’s degree in early childhood education.

She previously served as an intervention specialist aide in the Archbold school system.

She was attracted to the first grade teaching position because she said the school district, staff, students, and community are all excellent.

She is the daughter of Steve and Barb Dominique; her husband is Josh Kruse.

The Napoleon native gradu- ated from Napoleon High School in 2001.

She earned a Bachelor of Science degree in early childhood education from BGSU in 2006, and a master’s in special education from the University of Toledo this year.

She worked for the Northwest Ohio Educational Service Center from 2006-2008.

She has two children, Gaven and Jaden, both 6.

Brubaker said she was attracted to Archbold Elementary because she did her student teaching at the school in 2006.

Hurst is also a 2005 graduate of BGSU with a Bachelor of Science degree in early childhood education (pre-K to grade 3) with a reading endorsement.

She was a substitute teacher throughout northwest Ohio for three years.

She also served as a seventh grade and junior varsity volleyball coach in the Holgate school district for five years.

She resides in rural Ridgeville Corners with her family.

“I came to Archbold Elementary because the parents, community members, and teaching/ administration staff truly value the education of our youth,” she said.

“The dedication and support of Archbold Area School is amazing, and I am looking forward to continuing the tradition of excellence as a teacher, coach, and community member.”

Courtney Bowers will teach special education classes at the seventh and eighth levels.

She worked for five years at the middle school with the Northwest Ohio Educational Service Center.

“I am very excited to now offi cially be part of the Archbold school district family,” she said.

She is a Wauseon native, and a 1995 Wauseon High School graduate. She earned a bachelor’s in business administration from UT in 2000, and a Master of Education degree with licensure in business education and special education from BGSU in 2001.

Mandy Eigensee will teach special education at the third and fourth grade levels.

A Maumee native, she is a 1993 Toledo Central Catholic High School graduate. She graduated from the University of Toledo in 2004 with a Masters of Special Education degree.

She held the same position while employed by the NWOESC. She serves as a member of the elementary school intervention assistance team.

“I am very much excited about being a part of Archbold,” she said.