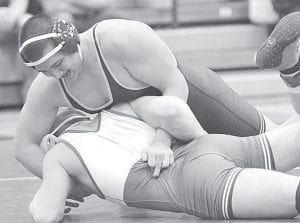 A trip to Columbus and the state tournament remains a possibility for eight Archbold wrestlers.

The eight placed in the top four in their weight classes at the Division III sectional tournament and qualified for the district tournament at Bowling Green State University, Friday and Saturday, Feb. 22-23.

Besides Day and Jaramillo, Short was the only other AHS wrestler in the championship finals.

The second seed at 120 lbs., Short received a firstround bye.

He pinned Nelson Foster of Paulding in the quarterfinals to advance to the semifinals, where he faced Ayersville’s Frankie Alvarado, who finished seventh at 113 lbs. in the state tourney last year. 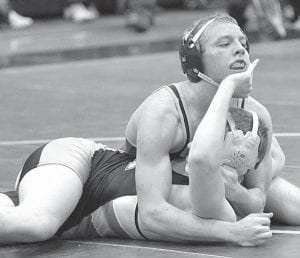 Short defeated Alvarado once this season and added to the total with a tough 3-1 decision.

Rematches are becoming the norm for Short. He faced off against Delta’s Kyle Keller for the third time in two weeks, each coming in with a win against the other.

Keller, the two-time defending sectional champ, added another trophy to the mantel as he won a 5-3 decision.

“We’ve only got two or three kids wrestling the caliber that you need to advance to the state tournament,” said Brian Becher, AHS coach. “Hopefully some guys pick it up, because two or three isn’t very good in my eyes.”

Becher thought the team’s performance was “good and bad.”

“The biggest thing is wrestling physical and being offensive,” he said. “Until guys buy into that philosophy, if they’re gonna go out and wrestle defensively, they’re not gonna win many matches.”

Damian Short is “not opening up enough in the first period,” said Becher. “Until he gets behind, he doesn’t open up and try to score points, so he’s got to change that philosophy.

“It was nice to get Kenny (Price) qualified with him coming off an injury. He needs to work on his conditioning this week. He needs to be running hard, because he was gassing out in the third period, and that’s not gonna get it done next weekend.

“The big step up is Koltin Zimmerman qualifying. I was pretty impressed with his performance on Friday night.

“Other than that, it was pretty much what we expected.”