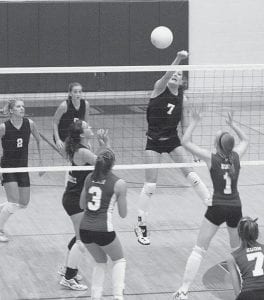 Haley Nofziger (7) sends a spike over the net for the Blackbirds in the Div. IV district final at Napoleon High School. Pettisville won the first game, but lost the last three to undefeated Edon, who advanced to the regional semifinal with Marion Local.- photo by Scott Schultz

Pettisville fans could smell an upset in the making, but it just wasn’t meant to be.

“I’m proud of the girls. They worked extremely hard,” said John Horning, PHS coach. “In the tournament I think we surprised people. Not many people were expecting a fourth seed out of our sectional to get to district finals, but we did, and that’s compliments to the girls.

“The fans were outstanding, today, too. The student section was right behind us all the way.”

The first game stayed tight the entire time. Edon grabbed a 20-15 lead when the Birds mounted a comeback. With Jodi Spotts serving, PHS worked its way to a tie at 20 behind three Katie Weber kills and a Spotts kill before Makayla Graves stopped the rally with a kill.

The Birds got the serve right back when Weber set the ball to a hole in the Bomber’s defense. A net infraction by PHS sent the serve back to Edon, but a Chelsea Schmucker tied the score at 22.

Haley Nofziger’s kill tied the score at 23, and Schmucker put the Birds at game point with a kill. Edon called time-out, and Aeriel Green’s spike was out of bounds, giving PHS the 25-23 victory.

“We couldn’t have had a better start,” said Horning.

Edon showed why it’s undefeated, though, taking the next three games.

“We had some lapses,” said Horning. “Defensively we couldn’t shut down their outside attack consistently.”

Offensively, “they maybe could have been a little more aggressive at the net. Compliments to Edon- they beat us fair and square.

“There wasn’t one game where (Edon) just ran away. We kept fighting. I thought we played scrappy.

“We got soft with some plays that resulted in them sending something back hard at us, and those are the runs a good team makes. They take advantage when you give them a break. To beat a team like them, you’ve got to play solid ball.

“Watching Archbold play the first game- we talked about that, too. They never gave up. They left their hearts on the court and that was our challenge after watching them. They inspired us to never give up, either,” said Horning.
District Semifinal
PHS Def. Stryker
25-12, 25-23, 25-16

“I’m so proud of our team, and I’m going to emphasize team,” said Horning after the Birds beat Stryker in their district semifinal, Tuesday, Oct. 23.

“Eight girls played; seven girls are cheering their hearts out on the bench, and they’ve done it the whole way along. They’ve accepted and united under a common goal: each game we want to play our best game.

“We’ve played within ourselves. We weren’t looking for something super-spectacular to happen tonight; we’re expecting us to play our game, with the skills that we have, and do that with confidence and trust your teammates.

“Our seniors have been great- all the hard work they’ve put into it. We told them in the locker room: we put a stake in the ground. We want to come back next year,” said Horning.

“We’ve got some goals that have been elevated for ourselves and for the underclassmen.

“We’ll have four starters back (Weber, Schmucker, Nofziger, and Karina Rohrer-Meck). I’ve got confidence we can get back here again, but we’re going to have to work for it.

“I told them enjoy the experience, but to get to here, and to play like they did, I couldn’t be more proud, blessed, and honored to have worked with them all.”