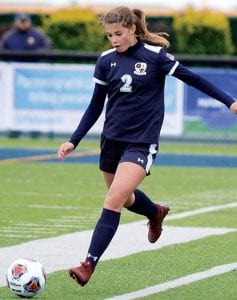 Emma Hall, a sophomore, dribbles the ball down the sideline in Archbold’s regional championship game with Liberty-Benton.– photo by Mario Gomez

On Saturday, Nov. 2, the Eagles used a pair of firsthalf goals and a smothering defense to win the rubber match.

Liberty-Benton defeated the Blue Streaks 2-1 to capture the regional championship and advance to the state semifinals.

“We knew it would be tough today,” said Jen Kidder, AHS assistant coach. “We know what we’re up against with Liberty-Benton, and I think they feel the same way about us.”

“Archbold/Liberty-Benton games are always close,” said Mark Pagano, L-B head coach. “This one was no different.

“We knew that they were very tough defensively.”

The Streaks and Eagles played to a scoreless tie during the regular season, so a low-scoring affair was expected.

Archbold came out aggressive and pressed the L-B defense for a majority of the first half. 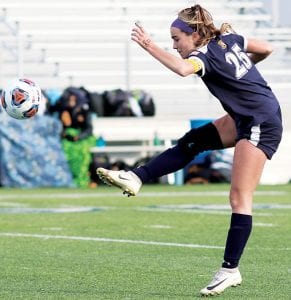 Madison Gigax, a senior, kicks the ball down the pitch in the regional finals against Liberty-Benton.– photo by Mary Huber

With 26 minutes on the clock, Leah McQuade gave AHS its best chance at a lead, coming around the right side and blasting a shot at the goal.

But L-B goalkeeper Allie Hiegel made a great stop, then stopped a rebound shot to keep the game scoreless.

The Eagles broke through the Archbold defense to score the first goal with 10:41 in the first half.

Maya Rickle found an opening and scored on a shot into the lower left corner of the goal.

Only 49 seconds later, the Eagles increased the lead to 2- 0 when a defensive breakdown by Archbold allowed Olivia Bodie an open shot that Reagan Kohler could not stop.

“We dominated 25 minutes of that first half,” said Kidder. “It was just a crazy breakdown that those two goals happened in.”

In the second half, Archbold looked handcuffed by the L-B defense until Chloe Nofziger found the advantage and zipped a shot that was too much for Hiegel to stop.

L-B ramped up the defense and held AHS to a few opportunities but nothing that posed a serious threat the rest of the game.

“When we got our second goal I was feeling pretty good,” said Pagano.

“But we knew that they still had that fight in them.

“That’s the kind of quality program that Archbold is.”

With the scoreboard clock showing 00:00, the reality of a return to the state semifinals faded for the Streaks.

“They all worked their butts off,” said Kidder. “They played hard and they never quit until the end.

“We started out a little bit rough in the second half but then came back, and I felt like we had our opportunities.

With the season over, the Streaks say goodbye to a pair of seniors but welcome back a wealth of experience for the future.

“Madison (Gigax) and Chloe (Nofziger) have done a tremendous amount for this program.

“(They’ve been) starters since they came in as freshmen, so those are gonna be big shoes to fill.

“But we’ve got a ton of talent on the team, so it’s gonna be exciting to see what’s in store for the future.”