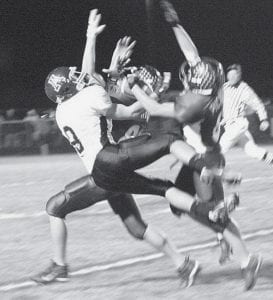 Jack Downey (8) is double-covered by a pair of Eagles and isn’t able to haul in the catch in Archbold’s Div. V playoff game with Liberty- Benton.- photo by Scott Schultz

Week 11: the high school football playoffs got underway around the state of Ohio.

For Archbold, under John Downey, head coach, it meant loading up the bus, Friday, Nov. 2 and traveling to Liberty Benton High School to face the undefeated Eagles, under Tim Nichols, head coach.

Going into the game the question wasn’t who would score. With both teams supporting high-powered offenses, the question was which team’s defense would step up to the challenge.

The Eagles’ offense put up 45 points while their defense held the Blue and Gold to 13 as Liberty Benton (11-0) advances to the regional semifinal against Tinora, Friday, Nov. 9.

The Streaks close the season with a 7-4 mark.

“We challenged our defense,” said Nichols. “We knew with Goering back there that it would be a humungous challenge. 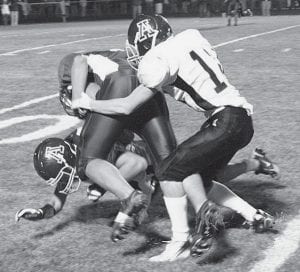 “We challenge the kids Monday through Thursday, and they performed tonight. I thought we did well covering people and we were able to get pressure on him (Goering) at times.

“Coach Snyder and the defense had a plan, and they performed.”

Taking the opening kickoff the Eagles scored first as Craft led his team downfield, covering 76 yards in 11 plays. He crossed the goal line from 1 yard out for the first score.

Now the Streaks were up. With Goering behind center and an offense that averaged 41 points per game, this game looked to be a shoot-out.

The Eagles had different plans.

Goering hit Jimmy Dunning for 5 yards. Following an incomplete pass, Goering picked up (Continued on page 10) 17 yards on the ground.

Two incomplete passes left the Streaks facing third and long. Goering dropped back and let go; L-B’s Justin Hyde stepped into the path, picked off the pass, and was off to the races, scoring on a 53-yard interception return.

The TD upped the Eagles’ lead to 14-0 just six minutes into the game.

“We threw a challenge to our defense,” said Nichols. “We didn’t have a defensive touchdown all season long; we just hadn’t scored, except with our offense. Justin (Hyde) stepped up on that first interception and scored.

“You can’t measure that. That was just a humungous play, and that gave us a little momentum.”

Nichols was right, when he said that boosted the Eagle momentum. The L-B defense went on to post a shutout in the first half while the offense continued to roll.

The Streaks needed to get going offensively, but were held by the Eagles’ defense and were forced into a fourth-and-four on their next possession.

Goering dropped back to pass but it fell incomplete, turning the ball over on Archbold’s 40- yard line.

Craft and company went right back to work. Hyde caught two passes for 9 yards and Craft hit Cody Crawford for a 32-yard gain.

With just seconds left in the half, Hyde tacked on 3 more points, nailing a 40-yard field goal.

“I thought our execution in the first half was pretty darn good,” said Nichols. “It may have been the best we did all year, and that is what you have to do in the playoffs.”

Craft connected on 12 of 16 passes for 144 yards in the contest, but it was the ground game that paid dividends for the Eagles as they racked up 344 yards.

Craft led the way with 171 yards on 15 carries. Brandon Pickett chipped in with 109 yards on 14 carries.

Goering finished his high school career connecting on just eight passes out of 30 attempts for 171 yards. The senior led the ground game with 44 yards rushing.

The Liberty-Benton defense allowed just 79 yards on the ground.

“We knew coming in we had to make tackles, and we didn’t do a good job the first half,” said Downey. “We had an opportunity to score to get back in the ball game, and we misfired on a wide-open receiver.

“It just wasn’t our night. We knew we had to execute, and we didn’t execute on either side of the ball.

“You have to give Liberty Benton a lot of credit. They executed, and we didn’t.”

“We had some kids get open, and I thought our front line had to buckle it up and they got it done. If we can run the ball also, it makes it that much tougher on Archbold.”

The Eagles didn’t have a letdown in the second half. Craft connected with Hyde for an 8- yard TD catch at the 8:52 mark of the third quarter. Pickett crossed the goal from 2 yards out to up the Eagles’ lead to 38- 0.

AHS finally got on the scoreboard when Goering hit Jacob Fidler on a 9-yard toss, and then connected with Jimmy Dunning on a 64-yard touchdown toss in the fourth quarter.

The Eagles answered with Brett Pasche crossing the goal line on a 49-yard run for the 45- 13 final.