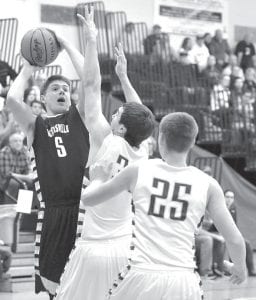 Gabe Beck (5) eyes the basket as he gets pressure defensively from Fayette’s Jerad Seiler.– photo by Mario Gomez

It was the end of the line for Pettisville (8-16) when Fayette, (22-1), ranked third in Division IV by the Associated Press, defeated the Birds 56-18 for the sectional boys basketball championship, Friday, Feb. 26, at Swanton.

The Eagles jumped out to an early 10-0 lead before Caleb Rychener hit a jumper at the four-minute mark to get Pettisville on the scoreboard.

Down 11-2, Rychener hit a traditional three-pointer to close within six, 11-5.

Jared Seiler’s layup was answered with a Justin Rupp three-pointer, cutting the difference to 13-8.

Fayette held the ball for the last shot of the quarter. Alec Bost drained a three with no time on the clock, giving the Eagles the momentum and a 16-8 lead.

Fayette opened the second with another 10-0 run before Gabe Beck stopped the drought with a bucket at the 3:30 mark, followed by an Evan King three.

Fayette scored the final points of the quarter on a Seiler bucket to go into the locker room leading 28-13. 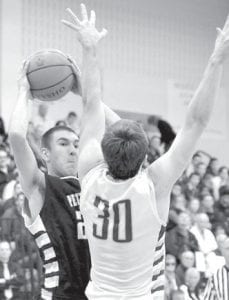 Dillon King goes to the basket.– photo by Mario Gomez

The second half sealed Pettisville’s doom, as the Birds scored only five points while surrendering 28.

Fayette led 41-16 after three and nearly shut the Blackbirds out in the fourth until Detric Yoder scored on a jumper with no time on the clock for the 56-18 final.

Seiler led all scorers with 16 points. Bost scored 12 points on 4-6 shooting from beyond the arc.

Fayette out-rebounded the Birds 20-13 and had only turnovers to Pettis- ville’s 13.