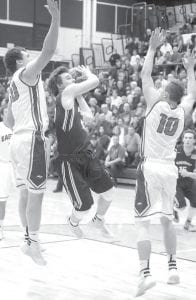 The Streaks were unable to bring down the Eagles, falling 68-61 and closing out their season with a 16-9 record.

The Eagles move on to the Bowling Green regional supporting a 20-5 record.

“In a game at this level we talk about running plays, but you have to make plays, and Liberty-Benton made plays,” said Doug Krauss, AHS head coach.

“This group has come a long way. I don’t think too many would have given us a chance to be playing in the district final back in November.

“This group has come a long way as any group that I have ever coached from day one. They have grown as a group; they have a ‘we’ mentality.”

Down 15-13 with 6.4 seconds left in the first period, Eli Miller, who finished with 14 points, came up with a loose ball at mid-court. 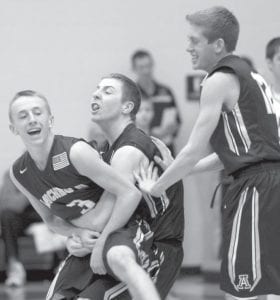 Eli Miller, Mike Weigand, and Derek Walker, from left, celebrate Miller’s shot from almost half-court that hit nothing but net to end the first period, giving Archbold a 16-15 lead.– photo by Mary Huber

The sophomore crossed the mid-court line and let the ball fly, hitting nothing but net as the quarter came to a close with Archbold leading 16-15.

The Streaks opened up the second with a drive by Derek Walker to boost the lead to 18-15, but the Eagles closed out the scoring in the half when Anthony Masterlasco scored back-to-back deuces and Clay Lenhart hit at the foul line for a 30-25 halftime advantage.

The Streaks sizzled at the foul line in the first half, connecting on 11-12 foul shots.

But the second half wasn’t so kind to Archbold, as they were 8-18 in the final eight minutes and 21-33 for the contest.

Archbold started the third with Bryce Williams nailing a jumper to cut the difference to 30-27, but the Eagles answered with four straight points.

Williams, who led AHS with 27 points, connected again, and Kaiden Bedsole, who scored 12 points, dumped in a three to close the gap to 34-32.

“We had a hard time guarding people,” said Krauss. “Masterlasco is as good as advertised, and (Nathan) Craft is a load in there, and they had other kids step up and make shots.” 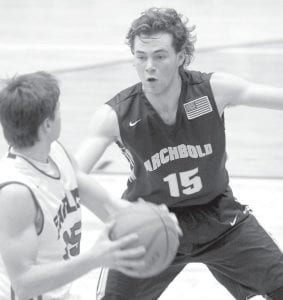 Liberty-Benton outscored the Streaks 10-2 over the next three minutes, as the Streaks faced a 44-34 deficit.

Miller and Williams answered for AHS, but Spencer Osborne and Masterlasco responded with back-to-back buckets for a 48-38 lead heading into the final period.

The Streaks outscored their counterparts 23-20 in the final period but came up short in their quest for a district title.

Masterlasco led L-B with 24 points. Osborne chipped in 15 while Nathan Craft had 14.

“We knock down foul shots and we may be out there cutting down the nets.

“This is uncharacteristic for our team. We’ve been pretty good at the foul line all year.