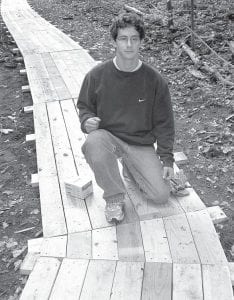 Eric Buckenmeyer kneels on the boardwalk of treated pine he and other volunteers constructed through Goll Woods to keep hikers out of the mud on one of the trails. Buckenmeyer took on the $3,000 project to build a boardwalk and lay gravel on other trails to fulfill one of the requirements to earn the rank of Eagle Scout.– photo by Alicia Buckenmeyer

When Eric Buckenmeyer started his Eagle Scout project to improve walking trails in the Goll Woods State Nature Preserve northwest of Archbold, he thought the project’s large size would make it difficult, but it would be manageable.

“When I started it, everybody was like, ‘Wow. That’s going to be a lot of work,’” said Buckenmeyer.

“And I was thinking, ‘Well, it’s not that bad, right? It’s not going to be too difficult.’”

But raising around $3,000, organizing 14 volunteers, and completing a two-phase project around storm damage in the woods doesn’t fall in the “easy” category.

Phase One, completed Sept. 25, was creating 250 feet of wooden boardwalk and installing it on the Toadshade path. The paths have problems with mud and even flooding each spring when the Tiffin River overflows.

Buckenmeyer frequently walked in Goll Woods with his family when he was growing up.

“The trails were always muddy,” he said.

While investigating ideas for his Eagle Scout project, he again saw the need for trail improvement. He found a one-foot-deep puddle, he said.

“Good thing I was wearing high water boots!” he said.

“It is a really beautiful place, and I know that people like to go on walks there. This is a way to make it nicer.”

His project improved hiking in an area that boasts trees as old as 200 to 400 years, along with native shrubs and wildflowers.

Buckenmeyer began planning his project in fall 2009. This required networking and assistance from experts.

Coordinating with Ryan Schroeder, Ohio Department of Natural Resources site manager for Goll Woods, Buckenmeyer created and presented his project idea to the scoutmaster, troop committee, and local and district advancement committees, which advance scouts through the scout ranks.

The committee ensures that an Eagle Scout project provides leadership opportunities. It must also provide a service to a non-profit institution such as Goll Woods.

After approval, Buckenmeyer turned to Dave Finn, a Toledo carpenter, for assistance.

“I had no idea how to put a boardwalk together,” said Eric. Finn came up with a boardwalk design that allowed two people to walk comfortably side-by-side.

Spikes driven into the ground hold the boardwalks in place despite mud or flooding.

After slight modification, it “went together and it’s a really nice-looking boardwalk,” said Buckenmeyer.

To raise money for lumber and gravel, Buckenmeyer solicited funds from individuals and businesses.

He also sold baked goods and trail mix at the Archbold Farmer’s Market.

He organized three workdays for Phase One. After he and a team of volunteers logged 83 volunteer hours in sun and rain, they completed and installed 27 sections of boardwalk to cover the dampest part of the trail.

In the woods, Jim Grieser, Archbold, used his garden tractor and a trailer to haul the heavy boardwalk sections to the middle of the trail for installation. Three to four people were needed to lift each section into place, and volunteers connected the sections together.

The 28th boardwalk section couldn’t be installed because it was stolen from beside the road while the team hauled other sections into the woods.

For the gravel phase, Jason Rychener, Archbold, gate-dumped the gravel on the trail. Buckenmeyer and his volunteers took 23 volunteer hours to level it with rakes, shovels, and wheelbarrows.

“The morale of all the volunteers was good,” said Buckenmeyer.

“We were all, of course, very tired by the end. I think everyone had a good time.

“The most gratifying moment was when we’d been working in Goll Woods for about five or six hours and we finally got the last boardwalk nailed down,” he said.

“I was in the neighborhood of halfway done,” with laying the gravel left to do.

Another project highlight was when a hiker stopped to talk to the workers laying boardwalk.

“We tell him about my Eagle Scout project,” said Buckenmeyer, “and he says, ‘I’ve been walking here once a week since 1971, and this is the grandest thing that has happened here.’”

“That was pretty surprising,” said Buckenmeyer.

Why do the Project?

“I’m doing it because I want to get my Eagle Scout (highest rank in scouting), and that’s important to me, so this is important,” said Buckenmeyer.

“It’s a lot of work. I have wanted to give up sometimes, but I would definitely say that it’s something that I wanted to do.

“I come back here in 30 years, and that stuff is still going to be here.

“This is something you can be proud of if you helped with this.”