Driver Unhurt After Collision With Train 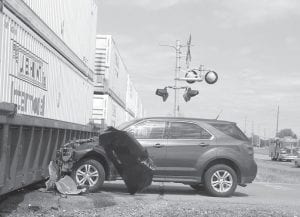 The driver of this sport-utility vehicle was not injured after it was struck by a train at the Co. Rd. D slant crossing. Note that while the front of the vehicle suffered heavy damage, the passenger compartment remains intact. – photo by David Pugh

Lawrence L. Soles, 74, Stryker, was uninjured after his sport utility vehicle collided with a Norfolk Southern train about 3:30 pm, Wednesday, May 10.

The Ohio State Highway Patrol report states Soles was backing the SUV in the southbound lane of the Co. Rd. D “slant” crossing. The crossing arm blocking the northbound lane was down at the time.

The westbound train, pulling a double-stacked load of shipping containers, struck the front of the SUV.

Troopers cited Soles for failure to stop at a railroad crossing when the gates were down.