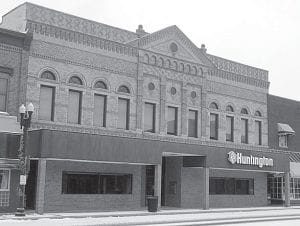 Huntington Bank will close its operations in Archbold’s historic downtown district on Friday, March 9. At least part of the building has been used as a bank since the structure was built in 1908. After closing, Huntington Bank officials said the building will be sold.– photo by David Pugh

Records on file with Brett Kolb, Fulton County auditor, say the building, at 219 North Defiance Street, has an appraised market value of $731,400.

Operations in Archbold will be centered around the branch at the intersection of South Defiance Street and Lugbill Road.

“Like any bank or retail business, we evaluate all our locations and traffic patterns,” he said.

“In Archbold, we had one office in the center of town, and one not far away.

“We looked at the south side and said, ‘let’s invest there, and make this our one and only location.”

Bromley said the goal is to find a job for those who work in the downtown branch somewhere within the Huntington system. They may have to work in other communities, he said.

Bromley said the south branch office will go through “rebranding” as the building is renovated.

“We’re going through a growing period. We’re investing where it makes sense,” he said.

There will be new, brighter colors, new signage, and the interior will change.

That includes different technology that will be used by cashiers and customers.

The new technology “will benefit the community, the customer, and our colleagues,” he said.

The bank will retain the Huntington name.

The south branch office “has a very nice drive-thru and ATM area,” he said.

With the addition of being able to bank through smart phones, the Internet, bankby phone, traditional tellers, an ATM, and drive-thru areas, the south side office offers many “touch points” for customers, Bromley said.

The downtown branch offi ce has always been a bank.

A 1976 history of Fulton County published by the county historical society states The People’s State Bank was organized in 1907 in the building now occupied by Bill’s Locker Room.

The present Huntington Bank Building was constructed by The People’s State Bank in 1908.

The upstairs of the large building housed an apartment, Archbold’s first public basketball court, a roller skating rink, and a dance hall.

Later it was converted to the State Dining Room, open to the public for private functions.

Rotary Club used it as its main headquarters. The town band had a practice room, and other small rooms were rented for professional businesses.

At one time the large building was divided on the street level for a restaurant, barber shop, dry goods store, and a pool room.

William Eiler, vice president, regional public relations for Huntington, said after the bank vacates the building, the company will do everything it can to ensure the space remains occupied.

“We will heavily market and maintain the building,” he said.