Downtown Could Use A ‘Little Shot In The Arm,’ Says Grime 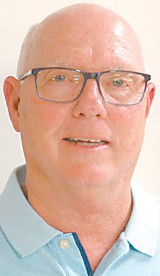 Brad Grime, Archbold mayor, said he believes the downtown “could use a little shot in the arm.”

That was just one comment he made during a wide-ranging interview held with this newspaper last month.

Downtown Archbold has been criticized for slipping away from retail business to what’s been called FIRE­– Finance, Insurance, and Real Estate.

“But when I look at it… they’re good businesses to have in the community,” he said. “We’re fortunate to have those businesses. They tend to have the nicest storefronts. They invest a lot of money.

“The Beck brothers, Lauber Group, Andres, O’Neil & Lowe, State Farm– you look at their buildings, they do a really great job.”

Grime said in his administration, “We’re going to look at ways to see what incentives we need to attract good, solid little businesses for downtown.”

One suggestion is economic stimulus money for updated storefronts.

“It’s a win-win situation for everybody, because it helps a new business coming. It’s a big draw,” he said.

“And if that business fails, you’re left with a beautiful storefront to pass on to the next business.

“So I think downtown could use a little shot in the arm somehow.

“We’ve had some new businesses coming in. It’s been kind of nice. So somebody is paying attention.

Attracting industry to town is a different matter.

There, the issue is workers.

“I think we could attract industry if we had the manpower, but it’s a small community, (approximately) 4,500 people, and we have a lot of people from Defiance, Bryan, (even) Perrysburg,” he said.

“It’s something that’s a challenge for everybody; it’s not just Archbold.

Grime said this is not only getting workers to take a job, but to stay with it.

“If you look at the people at Sauder’s, they’re men and women that started back in the 60s, the 70s, and the 80s, they’re still with them. That’s a great workforce.

“From what I’m hearing, you can get a good job with industry in town and if you’re willing to work and show up and work hard and pay attention, keep yourself self-educated and so forth, there’s work in this (town).”

Grime said he does see the need for more housing development in Archbold.

“We are getting maxed out. Look at the new house builds that have been going on for the past couple of three years,” he said.

“I see a need for more housing development.

“I think this council, over the next couple of years, is going to be challenged as to how we approach new development in the future.”

He pointed particularly to undeveloped property on the west end of Lugbill Road.

“The main storm sewer is already in place. All they have to do is dig that street out and curb and gutter it.

“I really feel that there’s an opportunity for Archbold to take the lead on that. I really think financially, there’s not much risk involved there unless the economy” falters.

Council has talked about housing issues before, but nothing has been done.

“We’re going to. That’s going to be a challenge for the (council) streets and sidewalks committee,” he said.

Grime said when he was first on council (from 2000-2004), it “was the only four years where I felt the committees were forced, not only forced, but required, to do their job.

The mayor at the time, the late Chuck Rychener, “imposed upon council, ‘do your job. Don’t just come to the meetings and sit there and do nothing. When you’re in your committee meeting, bring us some new, fresh ideas.’ I think that’s what I’d like to see council do.”

“You go into the older part of town, there are some homes that I just think that, for those people who can’t afford to build or buy a $250,000 home, they’re going to have to go in there and put some sweat equity into those places.

Archbold has laid a good foundation in older parts of town by rebuilding and improving streets and sidewalks.

“You see some really nice homes (in the older additions) and you see some that need to be improved.

“I think there’s opportunities there. I really do,” he said.