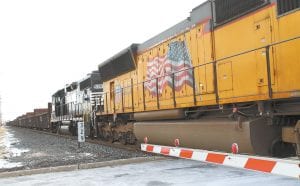 A westbound Norfolk Southern train blocked both downtown Archbold railroad crossings yesterday, Tuesday, for 4 1/2 hours. The train was led by four engines, two of which are shown blocking the Franklin Street crossing.– photo by Mary Huber

Traffic congestion in the railroad network, and problems with the braking system of a train caused traffic tie-ups in Archbold yesterday, Tuesday.

A westbound Norfolk Southern train blocked the Defiance Street and Franklin Street crossings in Archbold for about 4 1/2 hours, starting about 8:30 am. The train began moving a little after 1 pm.

Jon Glass, public relations manager for Norfolk Southern, said the westbound train was parked on the Archbold railroad siding about 5 am, due to rail traffic congestion to the west.

At that time, the train was cut, or separated, so the crossings in the village were clear.

Glass said once the conges- tion cleared, the train was put back together.

Then there was a problem developing enough air pressure in the brake system to allow the train to move safely.

Air pressure, generated by large compressors on the locomotives, must reach a certain level throughout the length of the train before the train can be allowed to move.

Glass said the train was more than 10,000 feet long (almost two miles). The length added to the amount of time it took to restore air to the train’s air brake system.

One part of the time frame provided by Glass does not agree with what was observed locally.

Glass said he was told the train was reassembled about 10 am; but by 8:35 am, the locomotives were connected to the train, blocking both crossings.

“All I can do is apologize” for the blocked crossings, Glass said.

“We like to keep our trains moving, keep the freight moving, to keep our customers happy,” he said.

However, trains must be operated safely, he added.