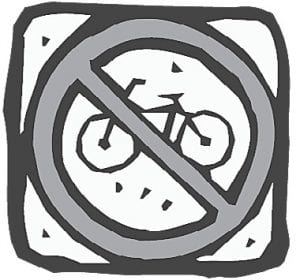 It’s summertime… time to remind everyone that bicycles, rollerblades, scooters, and other ride-ons must be walked, not ridden, on sidewalks in the downtown historic district.

There have been at least two incidents involving bicycles and people trying to share the same sidewalk that have resulted in broken bones.

In both cases, a bicycle being ridden down the sidewalk collided with a pedestrian exiting one of the many downtown business places. The injuries inflicted have been serious, but there is potential for far worse.

The village has an ordinance prohibiting bicycles and other “wheeled conveyances” from using the downtown sidewalks.

Unfortunately, when downtown was reconstructed a number of years ago, signs prohibiting bikes, etc., were taken down and not replaced.

There was an issue involving the new, decorative light poles and mounting brackets that wouldn’t fit. There must be some way to get the signs in place. Other signs have been fastened to the poles.

If not signs, it’s possible to paint a warning on the sidewalks. It’s been done in other communities.

Bicycles must be walked, not ridden, on downtown sidewalks. Without the signs, how can police be expected to enforce the ordinance?

Shouldn’t this issue be addressed immediately?