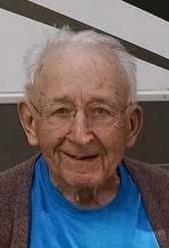 Donald C. Smith, age 95, of Ridgeville Corners, passed away Saturday, Feb. 27, 2016, at the Fulton County Health Center in Wauseon.
Prior to his retirement he had been a lifelong area farmer and worked at the Ridgeville Elevator for more than 20 years.
Don was born in Ridgeville Corners on May 23, 1920, the son of Clarence and Emma (Mohr) Smith.
On Feb. 15, 1953, he married Audrey Olmstead, and she survives.
He was a member of St. John’s Christian Church in Archbold, where he also sang in the Chancel Choir.
Surviving besides his wife, Audrey, is one son, Dean (Lisa) Smith of Ridgeville Corners; grandson, Ryan (Chelsi) Smith, and granddaughter, Rebecca Smith. He is also survived by two sisters, Doris Hull and Mary (James) Silcox.
He was preceded in death by his parents and brother-in-law, Harry Hull.
Visitation for Don will be held from 2 p.m. until 6 p.m. on Monday, Feb. 29, 2016, in the chapel at St. John’s Christian Church in Archbold. The funeral will be held at 11 a.m., Tuesday, March 1, 2016, in the sanctuary at St. John’s Christian Church, with pastor Erich Christman and pastor Adam Just officiating.
The family requests that memorial contributions be given to St. John’s Christian Church or the American Heart Association.
Online condolences may be offered to the family at www.grisierfh.com. Grisier Funeral Home in Archbold has been entrusted with arrangements. – Posted 2.28, 2:30 pm